← Two Quotes for the Morning… and the stupidity of Rick Santorum
… and a quote for the evening from Stephen Hawking: →

Recently I’ve been putting “in motion” backgrounds on Under The LobsterScope, specifically using animations made from the photographic work of Eadweard Muybridge.

To start with, here is his Bio from The Compleat Eadweard Muybridge (accompanied by ‘The Life of Eadweard Muybridge “Grandfather of Motion Pictures”‘, in Camera Comics No.4, Spring 1945, U.S. Camera Publishing Corporation, Chicago, Illinois.)

Born Edward James Muggeridge at Kingston-upon-Thames, England, on 9 April 1830, he emigrated to America in 1850, working in New York selling books and prints. He acquired an interest in photography, which developed after his move to California in 1855. His surname was now Muygridge. Recovering from a stagecoach accident he returned to England in 1860, where he invented a washing machine and a plate printing process. In 1865, now with the surname Muybridge, he became a Director of The Ottoman Comany and its associate company The Bank of Turkey, which failed (before trading) in the midst of the major banking crisis of 1866. A silver mine venture was also a financial disaster. Having failed to find success as a venture capitalist, he turned to photography. It seems that by this time he had learnt the wet collodion process.

Back in America, in 1867 – under the trade pseudonym ‘Helios’ – he set out to record the scenery of the far West with his mobile darkroom, The 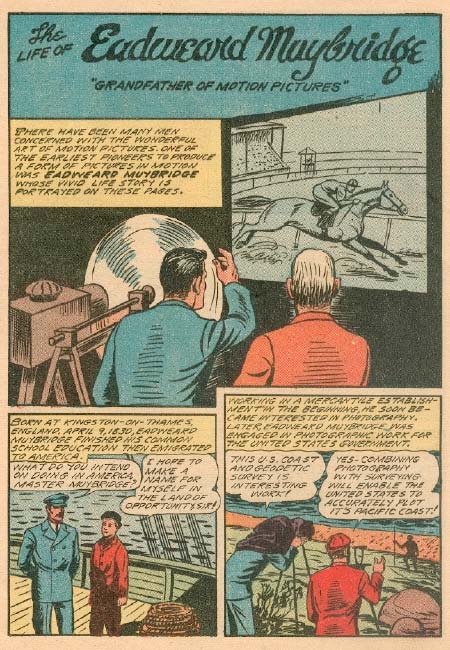 Flying Studio. He produced landscape photographs, most famously Yosemite Valley scenes, from large negatives, and notable stereoscopic views. He photographed many scenes in Alaska in 1868.

His reputation as a photographer of the first rank spread, and he was approached by the President of the Central Pacific Railroad, Leland Stanford, to attempt to photograph a horse trotting at speed, supposedly to settle a long-standing controversy among racing men as to whether a trotting horse had all four hooves off the ground at any point. In the Spring of 1872 (date claimed later), in Sacramemto, Muybridge photographed the horse Occident, but without any great success, as the current wet collodion process normally required several seconds for a good result. That summer, he travelled again to the Yosemite, and took a large number of ‘mammoth’ size plates.

Re-commencing his motion studies, in April 1873 he managed to produce some better negatives in which a recognisable silhouette of the horse showed all four feet above the ground at the same time; an engraving based on these photographs was published. The following month he photographed the Modoc Indians and US soldiers in the

Lava Beds in northern California, during the Modoc War. Also in 1873 he photographed the newly built Pacific Railroads.

While Muybridge was away on a photographic trip, his young wife Flora had an affair with a Major Harry Larkyns. Muybridge – an imposing figure in broad-brimmed hat and lengthening grey beard – believing that Flora’s child (Floredo, sometimes spelled Florado) was not his, confronted Larkyns, and shot him dead.

Tried for murder in February 1875, Muybridge was acquitted by the jury on the grounds of justifiable homicide; he left soon after on a 9-month trip to Central America, photographing the Guatemala plantations and scenes in Panama. On his return, he took up the action photography project once more. Using a new shutter design he had developed which operated in as little as 1/1000th of a second, in July 1877 he obtained pictures showing more detail.

At the same time he was engaged in photographing San Francisco in multi-section panoramic format. His largest panorama of 1878 comprises 13 panels.

Muybridge then devised a new motion-photography scheme, which Stanford sponsored at his farm at Palo Alto, in 1878 and 1879. A long shed was constructed, containing twelve cameras side by side, facing a white

background marked off with vertical, numbered lines. Each camera was fitted with Muybridge’s high-speed shutter, released by an electromagnetic catch. Thin threads stretched across the track were broken by the horse as it moved along, closing spring electrical contacts which released each shutter in turn. Thus in about half a second, twelve photographs were obtained showing all the phases of the movement. For another method of setting of the shutters, electrical contacts embedded in the track could be triggered by the wheels of a sulky (horse-drawn vehicle) passing over them.

Later, twenty four cameras were used; plus portable 12-section cameras giving oblique views. Although the pictures were still little more than silhouettes they were very sharp, and engravings based on these sequences, published in scientific and photographic journals throughout the world, excited considerable attention. By an alternative method of triggering the cameras with a clockwork mechanism, releasing the shutters at regular intervals, Muybridge was able to take series showing other animals in motion, and athletes. He presented the work to Stanford in an album entitled The Attitudes of Animals in Motion, of which only a small number were produced.

Having adopted the final version of his name – Eadweard 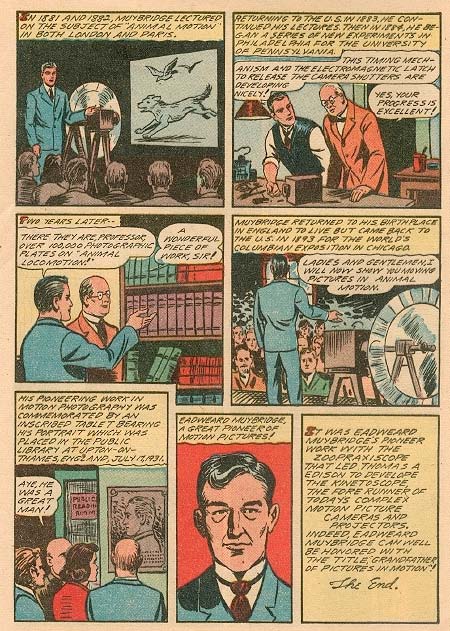 Muybridge – from 1880 he lectured in America and Europe, projecting his results in motion on the screen with his Zoopraxiscope projector (originally called the Zoogyroscope). This machine, described by the Illustrated London News as ‘a magic lantern run mad (with method in the madness)’ was basically a projecting phenakistiscope, with a contra-rotating shutter. The silhouette images, derived from his sequence photographs, were painted around the edge of a large glass disc. (Later, translucent coloured pictures were produced, but apparently never shown.) Many of the images were compilations integrating several different motion sequences. Following publication of Dr Stillman’s book The Horse in Motion (sponsored by Stanford, and which barely mentioned Muybridge) while he was in Britain, his contribution to the project was questioned by the Royal Society, causing him much embarrassment, and he returned to the USA.

In August 1883 he received an invitation from the University of Pennsylvania to carry on his work there. During 1884 and 1885, using the superior gelatine dry plate process and new camera apparatus, with a newly developed electrical release timer mechanism, he produced over 100,000 sequence photographs, of which approximately 20,000 were reproduced as collotype prints (between 12 and 36 images on a plate) in the Animal Locomotion folios published in 1887. The subjects were animals of all kinds (some taken in the Philadelphia Zoo), and human figures, many nude, in a wide range of activities. Following numerous lectures in Britain and Europe in 1891-2, on ‘The Science of animal locomotion in its relation to design in art’, his motion sequences were projected in the Zoopraxographical Hall at the Chicago Exhibition of 1893. The following year Muybridge returned to his birthplace in England, but made at least one extended trip back to the USA. He wrote entries on animal locomotion for Funk & Wangalls’ first Dictionary. His last publications were Animals in Motion (1899) and The Human Figure in Motion (1901), both comprising selections from the Animal Locomotion plates.

Muybridge died in Kingston on 8 May 1904. (Plaque at his last home.) His influence on the world of art was significant; the ‘rocking horse’ attitudes shown in earlier equestrian paintings disappeared. His work in pioneering the use of sequence photography was further developed by Professor Etienne-Jules Marey, Ottomar Anschutz, and others, and stimulated many inventors, notably Thomas Edison, to work which led to the introduction of cinematography in the 1890s. His sequence images continue to inspire artists from all disciplines, to this day.

So… for the next few weeks I’ll be doing Muybridge backgrounds, both from his Attitudes of Animals in Motion and The Human Figure in Motion… also from later constructions for his Zoopraxizcope. These are images I’ve been fond of for as long as I can remember (Elly and I have kept a framed page from the original edition of Animals in Motion in our living room for close to 30 years.)

I’m eager to hear your comments on Muybridge (although I know some of you have registered some discomfort in reading a blog with a moving background) and his work. Drop me an e-mail or make a comment.

← Two Quotes for the Morning… and the stupidity of Rick Santorum
… and a quote for the evening from Stephen Hawking: →
Loading Comments...
%d bloggers like this: