If Newt doesn’t win New Hampshire with this TV ad…

…then Republicans are smarter than I give them credit for.

Onward into the New year.

Getting Ready for the End of the Earth in 2012… 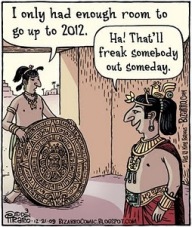 So the year 2012 starts on Sunday and we have a few possibilities (improbable as they may be) which can stagnate our minds in a thick depression if we let them.

The Mayan calendar, say. Sometime next December, the ancient Mayan calendar ends and with it, some disturbed thinkers claim, the world. So what will do it? What will make the world crumble and the pieces drift into the universe? Maybe some of the actions we might take along the way.

For instance, we might elect Newt Gingrich as President. This would make our military grow and perhaps bring us into a new and destructive war while wiping out all the aspects of government that deal with education, poverty and civilian participation. Then again, we might elect Ron Paul who wants to turn off recognition of Israel, turn on recognition of Palestine and acknowledge, but not indicate any changes, in remarks stated in racist newsletters in the 90s. These factors would certainly end MY world, and I’m not sure that they wouldn’t lead to ongoing destruction across the planet. What fun.

Or we might continue to ignore Global Warming (like the majority of Tea Partiers) or air pollution, or ongoing poisoning of our water, or the Monsanto chemicalization of our food. Then we might all be gone and who cares what happens to the planet.

So let’s celebrate the coming of 2012 and begin the campaign to educate and change the world (even though both Paul and Gingrich would end the Department of Education) and do what we can before it’s too late. As to the Mayans, they didn’t stick around long enough to update their predictions… but, hey, that’s how it goes.