Employment growth picks up in October with addition of 171,000 jobs

larger-than-expected 171,000 jobs in October across a broad spectrum of businesses. In this, the  final snapshot of the economy before election day, we have an interesting picture of job growth… more than double what it was in September.

Unfortunately, the nation’s unemployment rate rose to 7.9% from 7.8% in September. This was because more people jumped back into the labor market, including a very large group of 18-year old first time workers. This, of course, is a positive sign that workers may be feeling more confident about their job prospects.

The new Labor Department report, which also revised sharply higher job growth in September and August, may give a boost to President Obama, who continues with a slow but positive economic growth. There is still enough information for the undecided to support Obama who has kept us going even though Mitch McConnell and his Republicans have worked overtime to keep Obama’s Job Creation proposals and other forward moving activities from passing or getting any Congressional support. It’s interesting that Obama has gotten as far as he has… and it is even more interesting how little the Republicans have been concerned with helping to relieve our economy.

Comments Off on Employment growth picks up in October with addition of 171,000 jobs

After listening to Romney accusing the President of not being able to get the unemployment rate below 8.1%, today the newest rate report was released. At 7.8% it’s lowest level since January 2009.

Let’s hear it for the President as the rate came down and jobs, even though just a little (114000 jobs in September), moved up.

Meanwhile, what has Romney done to support his country in helping promote unemployment activity? Why, nothing. Nothing at all.

Comments Off on Unemployment rate drops to 7.8%!

Jobs for July higher than expected

Stronger-than-expected July jobs number reported by the government Friday eased concerns about an economy slipping back into recession and gave wind to President Barack Obama’s re-election hopes. But economists warned that the road ahead is likely to remain bumpy.

Non-farm payrolls grew by 163,000 jobs in July, according to the Labor Department, which also said the unemployment rate inched up by less than a tenth of a percentage point to 8.3 percent.

The strong report sent stocks soaring for most of Friday’s trading, with the Dow Jones industrial average up more than 220 points in the first hour, closing up 217.29 for the day at 13,096.17.

Mainstream economists had expected about 100,000 new jobs, so Friday’s report was wildly above expectations and more than double the revised 64,000 jobs that were added in June. Most heartening, economists said, was that the gains were spread across all sectors but construction and government hiring.

I find this is very encouraging even though there was a slight increase in unemployment.

Add this information to the number of private jobs gained under Democrats since 1961 and you wonder what Mitt Romney is really going to do about jobs. My guess is nothing!

Comments Off on Jobs for July higher than expected

So the economy is turning around…

The United States added 200,000 new jobs last month, the Labor Department said Friday, a robust figure indicating that the economic recovery may finally be building up a head of steam.

The nation’s unemployment rate fell to 8.5 percent in December, from a revised 8.7 percent in November, the government said.

I wonder, will this be discussed by Romney or Santorum or Paul or Gingrich? Only if they can make it seem like a downturn, which it’s not… but, hell, they’ll say it is. That’s been their

Remember what Hoover gave us?

typical response to any of Obama‘s achievements.

This was the sixth month that the economy added at least 100,000 jobs. Not enough, maybe, to get back to pre-recession levels, but, hey, the Republicans stepped on Obama’s jobs bill that would have created considerably more positions Also, if you look at Republican Primary speeches, none of the yoyos are getting ready to create ANY jobs (except for themselves).

poorer. It’s up to us to help make things better.

Comments Off on So the economy is turning around…

Last week to get this special offer…

I need your help to keep Under The LobsterScope going… but I never take your contributions without making it worth your while:

1. I present a blog that keeps you up to date on politics and the arts… and lots of things you don’t find anywhere else…

2. For every donation of $5.00 or more I am now offering 2 special fonts – real designer’s treasures which sell for $29.00 each – for your computer design and publishing efforts:
Bill’s Asterisks and Bullets and Bill’s Ampersands (see samples below.) 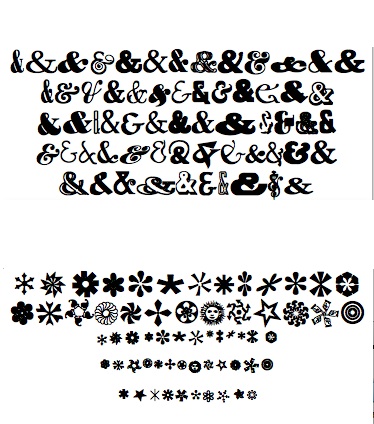 Neat, hey? From graphic designers to desktop publishers, these two fonts will be in use all the time. So, for a donation of $5.00 or more they are yours. Offer ends on Sunday Oct. 23.

Comments Off on Last week to get this special offer…

Friday report from the Labor Dept.: Jobs up higher than expected…

According to Reuters, U.S. job growth accelerated more than expected in July as private employers stepped up hiring, easing fears the economy was sliding into a fresh recession.

How much better the situation gets in the next six months is unknown. A stand-off between Democrats and Republicans over raising the country’s debt ceiling poisoned the atmosphere for employers and consumers. Whether this new report helps them to bounce back is questionable.

“While the better than expected report is welcome news, the unemployment rate remains unacceptably high and faster growth is needed to replace the jobs lost in the downturn.”

Comments Off on Friday report from the Labor Dept.: Jobs up higher than expected…

A group called BrokeFix in protest of the removal of the Labor Mural from the Maine Capitol in Augusta by the Right Wing Governor did what was called a “Photo Bomb” demonstration to bring the mural back.

Powered by a car battery, they projected the mural on the outside of the Capitol Building for two hours.

The USDoL had put up more than $36,000 to help commission the mural. If it is not put back in actuality, the citizens of Maine will likely have to return the grant money.

What is it about these TeaBag Governors? Have they forgotten all the advances that Labor brought to this country? Eight hour days? Weekends off? Summer vacations? Regular advancements and fair negotiations? This Le Page is as bad as Scott Walker and just as deserving of removal.

Comments Off on Making Labor Disappear… From Crooks and Liars: