What makes Tennessee the Capital of Creationist Conservatism?

For one thing, their House and Senate just passed a bill that allows criminal prosecution for the death of an embryo.

Although it has passed the Tennessee Senate and House, Governor Bill Haslam hasn’t yet said where he stands on the bill (HB3517) which marks the second change in the last couple of years to a 1989 law making it a crime to kill a “viable fetus.” Last year they cut the word “viable.”

The bill marks the second change in two years to a law that since 1989 had it a crime to cause the death of a “viable fetus.” That was changed last year to eliminate the word “viable.”

It seems, however, that under the scientific definition of a fetus,

the term only applies when eight weeks or more has passed since conception. Adding “embryo” covers from the moment of conception. Sen. Mae Beavers (R), the sponsor, got the text of the law changed.

Should this bill get signed by Haslam, Tennessee will be the go-to state for religious extremism. And maybe embryos will get tax deductions.

As to women’s rights, does this make a miscarriage a crime?

Why should average guys and girls avoid Tennessee?

In Tennessee, the Republican controlled legislature has introduced bills that discriminate against homosexuals, a bill that allows the teaching of creationism in science class (which has since become law), and bills that restrict abortion.

That, however, was not enough. Republicans are now going even further by introducing language in a sex education bill that would define kissing and holding hands as the gateways to sexual activity (the bill also says sex education teachers cannot discuss contraception.)

education law that includes warnings against ‘gateway sexual activity.’ In a new family life instructions bill, holding hands and kissing could be considered gateways to sex.”

When the Beatles sing “I Wanna Hold Your Hand” they will be proposing illegal activity. When the Crystals sing “Then He Kissed Me” they are really singing “He initiated Sexual Activity.”

What on earth is wrong with these people… didn’t they learn ANYTHING from the Scopes Trial?

The Intelligence of Populations… at least the U.S. is smarter than Turkey!

There is more stupidity than hydrogen in the universe, and it has a longer shelf life.    -Frank Zappa

Darwin would be astonished if he came back today. After all the scientific and academic proof since the publication of On The Origin Of The Species 152 years ago establishing the reality of Evolution, it is interesting how much disbelief there is in the concept.

If you look at people who either do not believe in Evolution, or are not sure that it is real, close to 55% of Americans are still in doubt about it (approximately 43% reject it completely). This is because of what? Inferior education? Religious belief in Creationism? Genetic stupidity?

If you remember prior to the Republican primaries for the 2008 Presidential elections, in a debate among eight contenders, the questioner asked which of them did not believe in Evolution. All but one raised their hands… supposedly men with the intelligence to lead a country.

So when I happened on this statistical chart while tooling around the net, I was surprised to find that we were 18th in Public Acceptance of Evolution out of 19 countries represented. Indeed, the only country we surpass is Turkey:

When we look at situations like that in Louisiana, which we reported on the other day, where the teaching of Creationism joins, or even replaces, the teaching of Evolution,  you would think we were back in the 1925 and observing the Scopes trial,  where a high school biology teacher, John Scopes, was accused of violating Tennessee’s Butler Act which made it unlawful to teach evolution.

I doubt if many of our current students are aware of this trial… it’s probably not brought up in history classes. Possibly they have seen the play or film Inherent The Wind which was based on this trial, but that is probably as close as they can get to it (unless they live in Dayton, TN, the site of the trial. Since 1987, the city of Dayton has staged a reenactment of the trial using the original transcripts, performing it in the same courtroom in which the trial took place. The annual event occurs during Dayton’s Scopes Trial festival with several performances showing over the weekend.)

One would hope we can develop the scientific intelligence to be up there with Iceland, Denmark and Sweden… although it seems unlikely in the near future.

Cartoon(s) of the Week – Party Portrait 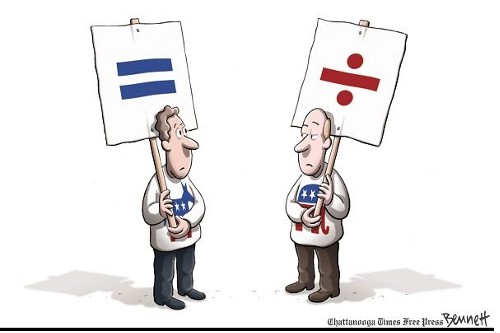 The coming elections show what Parties stand for…

Rex Babbin in the Sacramento Bee.. 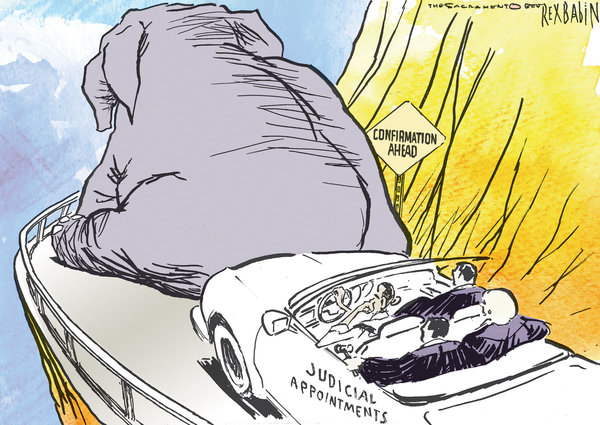 The Republicans, for instance, stand for getting in the way of coming changes…

Mike Luckovich in The Atlanta Journal-Constitution: 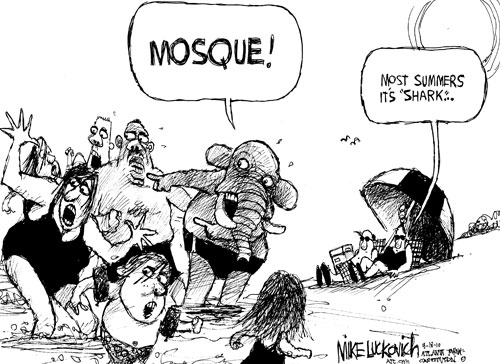 … all the time putting a public-oriented face on things.