Steve Doocy Calls This An Apology:

“Last week, President Obama talked about not being born with a silver spoon in his mouth. That was interpreted as a big dig at Mitt Romney. When I was interviewing Governor Romney on this show, I asked him about it. However, I did some paraphrasing that seemed to misquote the president. So to be clear, the President’s exact quote was ‘I wasn’t born with a silver spoon in my mouth.’ And I hope that clears up any confusion.”

See…it’s not really an apology. “That was interpreted as a big dig at Mitt Romney” is Doocy’s point of view and the reason he added “Unlike some people” to his quote. Just putting in the correct sentence does not an apology make.

I hope that confuses any clarity. Doocy sure did.

I am constantly amazed by the incredibly unsettling nature of tea-party politics. I would hope that politicians running for office (or even non-politicians for that matter) would have some kind of informed knowledge about national needs and issues.

Then something like this happens (according to the AP):

Samuel Wurzelbacher gained the nickname “Joe the Plumber” for expressing working-class concerns about taxes to then-candidate Barack Obama during a stop to the region.

I remember his discussion with Obama on the 2008 campaign trail and I am not impressed with the man. Actually, I think he is somewhat of a joke (and great fodder for both the Daily Show and Stephen Colbert.)

I’m beginning to think the national elections this year are going to be the most entertaining and amusing in years. Hopefully, we will survive as a nation.

Comments Off on Conservative politics takes another downward step…

Let’s hear it for Stephen Colbert… 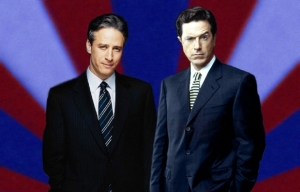 Last night on Comedy Central Stephen Colbert announced “an exploratory committee to lay the groundwork” for his “possible candidacy for president of the United States of South Carolina.”Of course, this came after polls for the SC primary showed him first at 5%, then at 7%.

He also handed control of his super PAC, Citizens for a Better Tomorrow, Tomorrow, over to his colleague, Jon Stewart, host of “The Daily Show.”

The PAC is already buying up television air time in South Carolina. They’ve purchased nearly $10,000 worth of time on a broadcast station in the Charleston, S.C. area between Jan. 15 and Jan. 19, and according to a South Carolina news web site, the Palmetto Public Record, Citizens for a Better Tomorrow, Tomorrow is also reportedly “negotiating a substantial media buy in the Columbia market.”

This is all so much more substantial than watching the other candidates as they attack each other for things that each of them do anyway.

Since there are no write-ins in South Carolina, being able to vote for Colbert may not be possible. This will cause a media brouhaha…just wait.

Bill Moyers made a great remark to Colbert:

I don’t get to stay up late at night if I’m subbing for John at WSHC the next morning, so I didn’t see Stephen Colbert‘s show until this morning when I returned from the broadcast. I was

glad to see he had Bill Moyers on as a guest… Moyers, after two years being away from television, is coming back this month with a new series, Moyers & Co., on Public Broadcasting.

He’s coming back because of his worries about where the moneyed corporations at the top are taking a government which, given their super PACs and lobbyists (and major office holders), have spent 30 years destroying the Middle Class.

Colbert, of course, did all he could to trap Moyers with his pseudo conservative comments (while letting Bill get in the information he wanted to get across), and the discussion came around to whether corporations were people a la the Citizens United decision.

Moyers caught him with a great comment, stating that a friend of his told him:

“He’ll believe that corporations are people when Texas executes one.”

Audience applause of course… and Colbert skipped a beat trying to come back with a remark.

The Polls close in New Hampshire in about two hours…

… and none of the news programs have any idea of where the results will be. They are all bouncing around the idea of Romney as the winner without committing themselves to that as a final opinion… and the big controversy is who will come in second.

Will Paul screw up Romney’s lead? Will Huntsman’s apparent rise in poll numbers make him the second placer and hold Romney’s numbers down? And what about the angry drive of Gingrich who seems to want Romney destroyed? 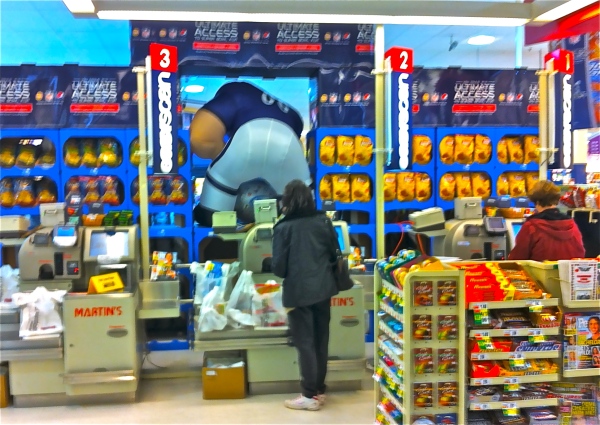 On top of everything else, eyes are starting to turn to South Carolina with a question as to how many of these guys are going to be running there. Gingrich is already spending millions on anti-Romney films. Perry is using his New Hampshire campaigning to reach South Carolina audiences… he’s likely to be dead last in NH. He’s also the one most likely to disappear after tonight.

Then there’s Santorum. He doesn’t seem to have the same push he gained in Iowa and, given his views on contraception, welfare reform (ie: take money away from the poor, especially the black poor, so they will work) and his anti-gay marriage and adoption stance, he may be turning folks off – FINALLY!

If I were a Republican (that is sooo hard to say), I’d vote for Huntsman. At least he seems to be campaigning to be everyone’s president… not just right wing weirdos.

Colbert Gets His SuperPAC. 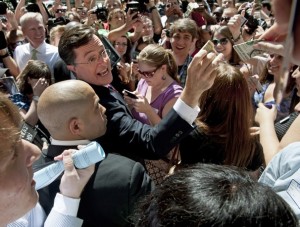 In a five-to-one decision, the Federal Election Commission granted comedian Stephen Colbert the right to create a “SuperPAC” to raise money for the 2012 election campaign. This would make him an equivalent to people like Karl Rove who are attempting to influence the elections.

But the FEC also concluded that the television host’s employer, Viacom Corp., would have to report any help it gives to Colbert for political activities outside the “Colbert Report” show. The panel gave the newly registered “Colbert Super PAC” a relatively narrow media exemption applicable only to the humorist’s show. Any assistance from Viacom outside the show must be treated as “in-kind” contributions and reported to the FEC.

Since the 2010 Supreme Court decision allowing unfettered corporate spending in elections, Super PACs like Colbert’s now number over 100. They didn’t exist before the Court’s decision (a point Colbert seems to be making in a comic way.)

“Some people have said, ‘Is this some kind of joke?’ I for one don’t think participating in democracy is a joke.”

..said Colbert to the crowd afterward. When a reporter asked him when the first ad would run, Colbert Responded:

“I’ve got to get some money first.”

Today was the 153d Commencement at my Alma Mater (class of 1968), Northwestern University. Stephen Colbert, of all people (NU class of 1986), was the Commencement Speaker.

Go HERE and listen to his very funny address.

…and congratulations to graduates everywhere.

And a funny quote for the evening, care of All Hat, No Cattle:

Re: The Anthony Weiner situation:

“I see only two options here: Either Anthony Weiner has too many photos of his junk to keep track of, or ‘Certitiude’ is his nickname for his penis.”

(btw… I don’t think it was Weiner who sent this photo to the student. I’d set my sights on Breitbart.)

An important message from NARAL

Please look at this and respond… It’s time to get serious about Women’s Rights and protecting Planned Parenthood.

In an attempt to disparage Planned Parenthood, one of the hosts of “Fox & Friends” suggested that women who need Pap smears and breast

What? No Breast Exams at Walgreens?

exams could just get them at Walgreens. Huh?

In fact, Walgreens issued a statement clarifying that its stores do not, in fact, offer such services… but “Fox & Friends” hasn’t retracted the lie.

Call on “Fox & Friends” to issue a correction and stop its irresponsible and inaccurate reporting.

Got it?  It’s time to make people realize the truth… and Fox & Friends is a good starting point.

Comments Off on An important message from NARAL

Everyone should hear Jon Stewart’s final speech from today’s Rally:

That about sums it up. “We live in hard times, not End Times.”
It was great to listen to Jon.

Oh yeah… go out and vote.

Tomorrow is the Rally… are you going to D.C.?

Tomorrow will be the Rally to Restore Sanity and/or Fear that Jon Stewart and Stephen Colbert are pulling off on the National Mall. What seems to have stated as a satirical copy of the Glenn Beck Rally to Restore Honor, all of a sudden the Stewart/Colbert gathering is starting to be taken seriously… at least 8 commenters in this morning’s NY Times, various television coverage pieces both Nationally and on the DC local stations, Time Magazine… and on it goes.

Speaking of Time Magazine, this from their article on the Rally is why the two comedians are holding it:

Based on what Stewart and Colbert have said, though, the focus of the rally is the ugliness of

political debate: the Hitler comparisons, the head-stomping, the conspiracy theories, the assumption that your opponent is also your enemy and must always be assumed to be acting in bad faith. In announcing the rally, Stewart said that the maybe 15% or 20% of Americans who act this way dominate the conversation and the media, crowding out the other 80% or so, who could probably agree on reasonable

compromises but don’t have time to obsess on partisan warfare. To paraphrase Yeats, the worst are full of passionate intensity; the best “have shit to do.”

So, this is a way to get ready for Halloween, let’s say. But is it going to have any effect on the election next

week? Perhaps a little in the local area. I’m not sure about it’s National Effect (although it is interesting that people like Oprah Winfrey are providing tickets to get groups of people there and Arianna Huffington is providing buses from New York. These are politically “with it” celebrities and they give a distinct mark of reality to the whole thing.

I’m going to watch it from the confines of my living room and television, but I’ll be there in spirit. I’m curious to see what the actual body count is, however.

Another Rally at the Lincoln Memorial: Progressive Groups present “One Nation” on October 2.

If you can’t wait for Jon Stewart or Stephen Colbert on October 30, you’ll be glad to know about the “One Nation” Rally coming up in DC:

Comments Off on Another Rally at the Lincoln Memorial: Progressive Groups present “One Nation” on October 2.

…here he is before the House Immigration and Agriculture Subcommittee:

So now there is a debate as to whether this was effective or merely entertaining. It sure got a lot of people looking at the migrant fieldworker situation.
________
UPDATE:

Watching CNN this morning, the opinion of the newsman was that this was a bad move by Zoe Lofgren, the subcommittee chair who invited Colbert to appear.

And, of course, Fox News has weighed in with this statement:

His “testimony’ was an embarrassment to himself, his country, the Congress and the entire issue of immigration reform. It amounted to nothing more than a bad comedic monologue.

My opinion, of course, is that Colbert was right on and Congress was a little more interesting to watch yesterday… and the point was made.

I’m over doing “Winners and Losers” with John Case right now (WSHC 89.7 FM). I can’t wait to get home to check this out on C-Span (this from RollCall):

Looks like Oct. 30 will be a great Saturday to go to DC…

If you watched The Daily Show or the Colbert Report last night, you know why.

If you didn’t. check out the HuffPo article below:

This hits BP right where we live.