The State of the DisUnion

Just once, after a State of the Union message, I’d like to get the sense that the member of the opposing party making the comments on the President’s speech had listened to it.

Gov. Mitch Daniels (R – Indiana) was the opposition leader commenting last night, and he was content to give a list of everything the Republicans consistently say is Obama’s lack of policy decisions. This, of course, ignored just about every statement the President made that not only contradicted the Republican positions, but backed up each statement with statistics and examples proving their fairness and worth.

Daniels, however, accused President Obama of doing the things which just about everyone who watches this stuff would lay at the feet of Republicans:

“No feature of the Obama Presidency has been sadder than its constant efforts to divide us, to curry favor with some Americans by castigating others,” he said.

Obama dealt directly with reducing the deficit, with everyone playing “by the same set of rules”, by adjusting taxes on the rich and saving deductions for the middle class. He gave support to businesses, while the Republicans stated that he ignored business.

Obama’s speech was positive and moving. The total result of the Republican response was that they could only solve all our problems by reducing the deficit. The President gave

the outline of what is going to be a very strong campaign. The Republicans seemed to be on the ropes.

Tonight is Obama’s State of the Union Address… 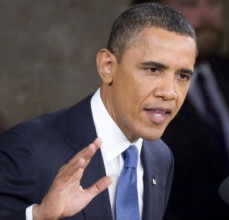 President Barack Obama will deliver his State of the Union speech tonight at 9 p.m. EST. It is expected to last at least an hour, after which Gov. Mitch Daniels of Indiana will deliver the Republican response (there will be a Tea Party response from Herman Cain… don’t miss it. All speeches like this should end with humor.)

Obama is expected to use the State of the Union to pitch new initiatives on jobs, taxes and housing, in what will be billed as his opening salvo in a long 2012 election race. He will probably push tax breaks for bringing manufacturing jobs home from overseas, give ideas to help the troubled home-mortgage market and create incentives for alternative energy development. Expect him to call again for higher taxes on the wealthy – despite consistent Republican opposition – and to speak of further pressure on China over currency and trade practices.

There are a number of ways you can watch and follow the speech online. The official White House website, which will not only be streaming the speech live, but will be accompany it with charts, stats, and data that reinforce the address. On television, ABC, CBS, Fox, and NBC will all air the speech live. The Huffington Post will also run liveblog coverage of the event, accompanied by an embedded live video feed.

Some items based on recent Obama remarks leading up to the address:

The President has promised to let the Bush tax cuts for millionaires expire at the end of 2012.

“[The Affordable Care Act] is making prescription drugs cheaper for seniors and giving uninsured students a chance to stay on their parents’ coverage.”

At least 2.5 million young Americans now have health insurance through their parents’ health care plans until 26 years of age. As of November, more than 2.2 million people with Medicare had saved more than $1.2 billion on prescriptions (I’m one of them. I support this whole heartedly. – Bill)

Expect the Republicans to make it clear that they will continue to oppose Obama’s positions… but also expect Obama to say that he will be seeking bi-partisan progress even though it is an election year.

It should be noted, however, that State of the Union messages have historically not effected increases in a President’s poll ratings (an exception being Bill Clinton’s 2nd address which increased his numbers by 3%.)