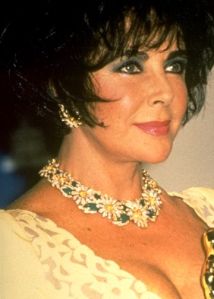 Elizabeth Rosemond Taylor has died in Los Angeles of heart complications.  Born in Hampstead, a wealthy district of North West London, the second child of Francis Lenn Taylor (1897–1968) and Sara Viola Warmbrodt (1895–1994), who were Americans residing in England.

Her parents were originally from Arkansas City, Kansas. Her father was an art dealer and her mother a former actress whose stage name was ‘Sara Sothern’. Sothern retired from the stage when she and Francis Taylor married in 1926 in New York City.

A dual citizen of the UK and the U.S., she was born a British subject through her birth on British soil and an American citizen through her parents.

Taylor was famous for her films (many, such as National Velvet, Cleopatra, A Place In The Sun and others), for eight marriages (two to Richard Burton) and for her campaigning against HIV and AIDS.

She won her 2 Best Actress Academy Awards for Butterfield 8 and Who’s Afraid of Virginia Woolf.

In her long career from child actress to Hollywood Icon, Taylor passed away at Cedars Sinai Medical Center in LA.

Comments Off on Elizabeth Taylor Dies at Age 79…