Quote (heh heh) of the Day…

Thanks to All Hat, No Cattle for citing this one:

When I heard the Republicans were in President Obama’s home state, I said, “They’re holding a primary in Kenya?”

I’ll have to start tuning in on Craig again…

I don’t often feel bad for Republicans… but after the Delaware Primary, I have that feeling…

“[P]ublic records show O’Donnell has no steady income, no savings, no investments and owns no property. She rents a room out of her campaign office, which is a town home in a residential community.”

Shortly after dropping a gender-discrimination suit against her former employer, a conservative printing firm that fired her for misusing company resources, she began her Senate run. She is also facing an IRS lien for $11,000 in unpaid taxes.

see what I mean (just her notion of what “carbon dating” means is pretty outrageous.) Delaware has always appeared to be a small but advanced State, well ensconced in the 21st Century… now it has an opportunity to go in reverse direction. 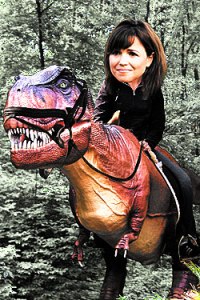 Christine O’Donnell won’t have to lie about this Senate race. She won the Republican nomination for the Senate in Delaware fair and square, against a much more experienced, much more moderate, much more respected opponent, nine-term congressman and former governor Mike Castle. Now that she’s the nominee, the Republican Party will likely abandon the woman the chairman of the Delaware GOP recently said “could not be elected dog catcher.” Perhaps, in addition to all the things that have already come out about O’Donnell — tax questions, misuse of campaign funds, a trail of lies, some interesting thoughts on masturbation — they know how much remains left uncovered. Such as that, on March 30 of 1996, in her role as the spokeswoman for the Concerned Women of America, O’Donnell debated the merits of evolution on CNN, and she was not a fan.

Comments Off on I don’t often feel bad for Republicans… but after the Delaware Primary, I have that feeling…

Republicans used to avoid criticizing each other…

…but it looks like they forgot Reagan’s “eleventh commandment”.

Then again, I’ve never thought much of Inhofe.
Or, for that matter, Republicans in general.

Comments Off on Republicans used to avoid criticizing each other…

The WV Secretary of State’s office have only posted the unofficial results of yesterday’s Primary Election, but here in District 57 it looks like our guy, John Doyle has taken it by a large margin (47.92% compared to his closest challenger, Lori Rea, of 26.22%.)

Looks like John will be up against Elliot Mark Simon in the General.

It’s primary day today and I’m getting out to vote for Delegate Doyle (and others) here in Shepherdstown. If it’s voting day where you are, get out and vote… it’s what keeps us free.

Comments Off on Voting Day in West Virginia

Quote for the Day – Harold Ford Not Running

Yesterday, former Congressman Harold Ford stated publicly that he will not challenge Sen. Kirsten Gillibrand in the NY Primary for the Senate seat. Why? Here’s his statement:

“I’ve examined this race in every possible way,and I keep returning to the same fundamental conclusion: If I run, the likely result would be a brutal and highly negative Democratic primary – a primary where the winner emerges weakened and the Republican strengthened.”

I wonder if his examination included polls that put him so much lower than Gillibrand… and if he realized how much his more or less conservative history would be rejected by the more or less liberal NY Dems?

Comments Off on Quote for the Day – Harold Ford Not Running