in the popular vote, approximating the margin that George W. Bush achieved in defeating John Kerry in 2004.

In addition, he gives Obama a 91.6% chance to win the necessary 270 electoral votes for re-election.

John Avlon: “The final polls are out and behind the national horserace is a fascinating dynamic — Mitt Romney is narrowly winning independent voters while President Obama is winning centrist voters by a nearly 20-point margin.”

“This is significant because in past elections independents and centrist voters have been largely synonymous-overlapping cohorts, reflecting the belief of many independents that the two parties are too polarized and disproportionately dominated by their respective special interests. But what I think we’re seeing this year is the extended impact of the tea party – a growth in the number of independent conservatives that has moved the overall independent voting block slightly to the right. In turn, centrist voters are more likely to vote for Obama precisely because of the polarizing impact of the tea party and the intransigence of many conservative congressmen when it came to working in a good faith spirit of principled compromise with the Obama administration.”

OK… I’m off for my morning appointments (gee…how do people get up this early?).  – Bill

Due to a medical emergency (the discovery of a potential brain tumor… aint that a kick in the head?) I’m going to be going in for several days of testing, etc., but I’ll try to keep up with you folks. I want you to know how much I appreciate the readers of Under The LobsterScope, and your e-mail to me is always welcome, as well as your likes and comments.

DON’T FORGET TO VOTE THIS MORNING IF YOU HAVEN’T ALREADY.

I don’t want to wake up in a hospital and find that Mitt the Twit is president.

I’m glad that Nate Silver in the NY Times, 538 column, is still got his usually very accurate poll predictions on Obama carrying most of the swing states… and his prediction that our president will be re-elected.

Your e-mail is always appreciated… Bill.

Comments Off on I might have limited posting for a while…

So what is the chance of Obama winning right now?

Bob Cesca published Nate Silver‘s graphic projecting the election winner which appeared in the NY Times. I’d like to reproduce it as well since it seems to show the start of a legitimate bounce for Obama after the last debate.

Monday’s debate (the last one) may give another push to Obama if he pulls of a victory as he did in the second round. And remember, the election is only 18 days away. Focus on both campaigns will become very tight in the next few days.

Comments Off on So what is the chance of Obama winning right now?

The Conventions are Over… where do the candidates stand now?

Nate Silver made some reasonable observations in the New York Times. Here are his predictions as of today: 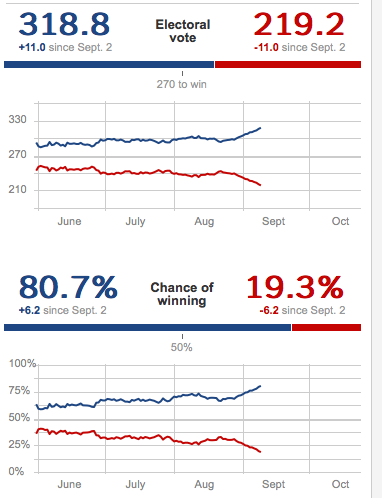 How this will change over the next two months is the question.

The state by state probabilities as of today are certainly in Obama‘s favor: 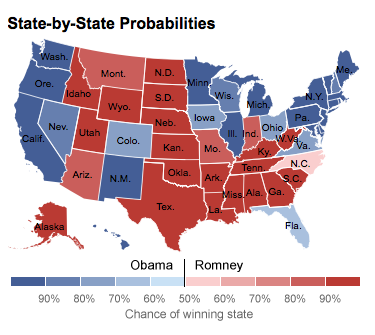 Needless to say, the heavy vote states are right there in Obama’s pocket. Let’s see it it lasts.

Comments Off on The Conventions are Over… where do the candidates stand now?

Howard Fineman is predicting a BIG loss for Democrats.

This article from HuffPo gives you Fineman‘s views this morning… I’ll give you the first couple of paragraphs, but DO go in and read the rest:

Me? I see it the way Tony Auth does:

We are about to enter an era of lunacy.

Here’s the first couple of paragraphs:

Election day is next Tuesday. Papers like the New York Times and Washington Post began publishing their post-mortem analyses of the election results last week. What should Obama do now that next Tuesday’s results are in? Highly paid opinion writers have opinions.

I’m going to leave the actual electoral predictions to my colleague Articleman and to folks like Nate Silver. But even if Tuesday night were to turn into an exact replay of 1994, district by district, the political situation on Wednesday morning would still be something completely new. History echoes itself, but it never repeats exactly. If this really were 1994, of course, being more like Bill Clinton would be a stupid idea, like telling someone fighting Muhammad Ali to be more like Sonny Liston. As Ezra Klein and Josh Marshall both remind us, the Big Dog was soundly beaten in 1994. And his post-1994 playbook, no matter how successful it was fifteen years ago, is just not going to work in 2011. Things have changed.

Now go to DAGBLOG to read the rest.

Comments Off on Here’s a great long post by Doctor Cleveland:

What happens if “No One” gets elected in Nevada…