Elly and Cassandra say I had a seizure going into the test… apparently I was “babbling”…but I don’t remember it. I was under the MRI’s spell for about an hour. Now we are having dinner and getting ready to drive back home.

They have added 2 more doctors appointments in Hagerstown tomorrow. There goes my last day off. I’ll be glad when the brain surgery is all over with this weekend.

Posting from my iPhone is a new experience for me. These fat fingers on a teensy keyboard really means not much writing. Sorry.

Comments Off on Just finished my MRI…

A lot of the pain is gone, but what’s left is still miserable. 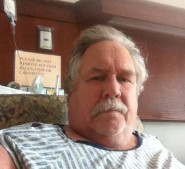 It’s the two week anniversary of my fall down the cellar stairs and I continue to stay pretty much immobile in my recliner which I’ve packed with pillows.

The pain was so intense when this started that I was hoping I’d pass out and it would all be over. The pain rating has gone from a 10 to about a 2 now and I expect it will be another few months before the five ribs, shoulder blade and collar bone all heal up. This has been the worst two weeks of my life.

I have to say thank you for all the e-mail, Facebook comments and phonealls and text messages I’ve recieved from everyone… I certainly appreciate it. With any luck I’ll be able to travel to my son’s wedding in Wisconsin next week…as long as I stay pretty still on the train.

Getting ready for tomorrow…

John Case and I are broadcasting from the Mellow Moods Cafe again tomorrow morning. Officially the show is from 7:30 to 9:00 AM… we set up at 7:00 and sometimes do some pre-show stuff during that half hour. Tune in to WSHC 89.7 FM if you’re in our area (or go to http://www.897wshc.org to hear us on line.) We’re going to end right on schedule this week because John has to pick up a puppy he is babysitting for Ruth and Mike Robertas over at 4

Seasons Books (our sponsor) and I have to be at Washington County Hospital for a T.E.E. test at 11:00 (part of Dr. Kugler et al’s investigation into my teeny language seizures.)

Anyway, I’m getting all my prep work in tonite for the show and for tomorrow’s blog, since a big chunk of my day is going to be sedated and in the hospital. I’m not really looking forward to it, as they have to drop a reading device down my throat to get it behind my rib cage (hence the sedation). Can you think of something more unpleasant?

From midnight tonite until after the test tomorrow I’m not allowed to eat, which will make this even harder to get through. There is a medication I have been taking for several months now which helps keep my blood sugar in line… not insulin, I take that, too

… and it has a side effect I dislike… it makes me very nauseous. Twice a day. It’s not something I want to feel in my gut before tomorrow, so today I refused to take it (and I won’t tomorrow, either) and, lo and behold, I feel great today. I’ve got to talk to my Endocrinologist about this…I’d like to not be nauseated twice a day.

Saturday I expect to be fine again… and, hopefully, I can get into the Full Circle Theater and work on the lights for Thurber Carnival. I can’t wait.

Comments Off on Getting ready for tomorrow…

Getting ready for more Medical visits…

Good Morning. I’m organizing my records of medications and other appointments before having my first appointment this morning with Dr. Khan, a Neurologist, over in Hagerstown. This was another one of the doctors set up by my GP, Dr. Kugler, to try to get to the bottom of my momentary lapses of spoken language control (which has gone on for several years and, although I’ve brought it up with Kugler visit after visit, the increase in occurrences has finally made him think this is something to look into.)

Friday I go to Washington County Hospital for a T.E.E. test after I do the morning radio show with John Case. Elly is driving me over, since I have to take a sedative and won’t be able to drive after it. After the

test I have some days off from medical stuff, then I have, in October, blood tests and doctors’ appointments and a CAT scan. Then maybe they’ll find out what’s wrong and we can do something about it.

In the meantime, we’re only a little over a week away from Thurber Carnival opening at Full Circle Theater and I’ve got to get the cues and light levels finalized up in the booth.

week or two. That’s JUST what I needed.

Comments Off on Getting ready for more Medical visits…

Some Education for the Afternoon…