Freedom’s just another word for nothin’ left to lose…

WATERFORD, Conn. —Say you are a 17 pound lobster named Larry living in a tank in a Connecticut restaurant, just waiting to be bought, boiled, buttered and eaten. Not a pleasant thought, is it.

A lobster that big could be anywhere between 70 to 100 years old… he’s lived through the great social and political events of the last couple of generations. Should he be in this situation? 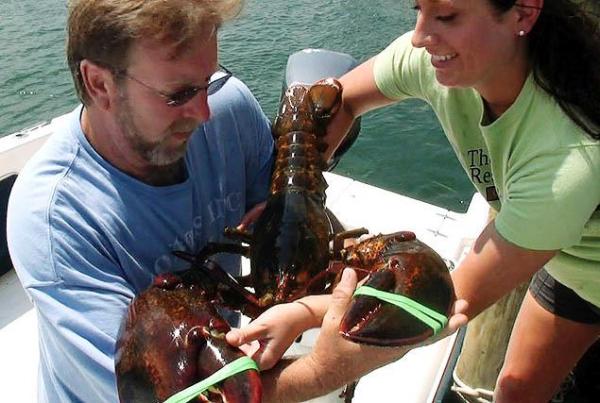 Carrying Larry out to sea…

Fortunately for Larry, a Connecticut man, Don MacKenzie, purchased him at the restaurant, then released him back into Long Island Sound. MacKenzie says the local kids were calling the huge crustacean “Lucky Larry”.

“It takes seven years for him to even become a lobster big enough to keep,” saidMacKenzie. “For a lobster to live this long and avoid lobster traps, nets, lobster pots … he doesn’t deserve a bib and butter.”

MacKenzie won’t say how much he paid The Dock restaurant to take Larry off the menu Tuesday.

“Let’s just say that it’s the most expensive lobster I never ate.” 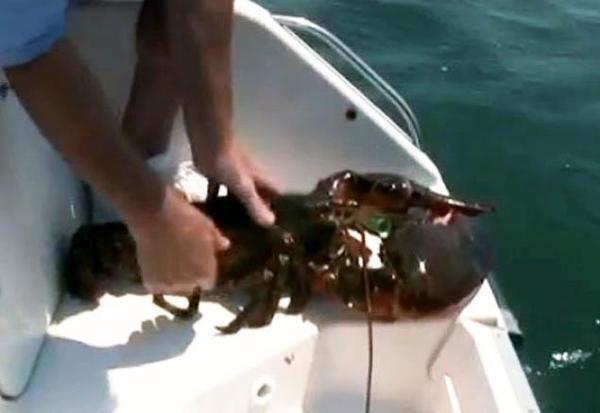 Here at Under The LobsterScope we have great admiration for McKenzie who saw a creature in a deadly situation and saved his life. Larry thanks him and we do, too. It makes me feel proud to come from Connecticut.

Under The LobsterScope’s new Fundraiser:

Web Poppers are a collection of small images, averaging 72 x 72 pixels, that are based on Bill’s picture font designs and other sources. They can be used to illustrate posts or to comment on any number of issues.

Each set is delivered on CD with 300 of the most popular JPEG images that I use in my own blogs, Under The LobsterScope and Panhandle Vegan. I have been getting great responses to these for the past year and the number of requests that I release them has been substantial.

So here they are.

The complete set costs $39.95, all taxes and shipping included. very set that is sold helps support this blog… and believe me, we need it.

Comments Off on Under The LobsterScope’s new Fundraiser: