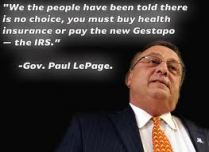 The other day, Gov. Paul LePage (R) of Maine said that the Internal Revenue Service was not far from the Gestapo, the Nazi secret police. Really said it. In public.

Perhaps he’s got a distorted sense of humor…how could anyone think he really believes what he said?

Then he attempted to clarify his comment, but added to the controversy instead. His quote:

“What I am trying to say is the Holocaust was a horrific crime against humanity and, frankly, I would never want to see that repeated. Maybe the IRS is not quite as bad — yet.”

A reporter asked LePage if the IRS was headed in that direction, and he said it was.

When asked if he thought the IRS was going to kill a lot of people like the Nazis, LePage said:

When do gubernatorial elections come up again in Maine? This guy has really got to go. In one small set of statements he has offended Americans, Maine voters and Jews everywhere…and he doesn’t even know it.

This is a great idea… I got started reading it after a mention on Andrew Sullivan‘s site, and I went to the official FixUC proposal page: http://www.fixuc.org. Here is the basis of the proposal direclty from the FixUC presentation:

What is the UC Student Investment Proposal?

Within the past decade, UC students have suffered from egregious increases in tuition costs. In 2011, the State of California cut $650 million in UC system funding and decreased its total support to the system by 21.3 percent. These cuts were met, yet again, with tuition hikes by the UC, and tuition for the 2011-2012 school year rose nearly 18 percent from last year’s. UC tuition has nearly quadrupled over the last decade alone.

In an effort to combat the increasing financial burdens facing students of the University of California, Fix UC has designed a comprehensive plan for the restructuring of the system by which students pay for their education.  The UC Student Investment Plan will make it possible for students to attend the UC without paying any upfront costs whatsoever.

After they graduate and get jobs, UC alumni will pay a static percentage (based on 5%) of their salaries for 20 years of employment.  Because payments are based on salary, no UC graduate will have to reckon with fees that he or she cannot afford.  Students will no longer be held hostage by unmanageable loan payments with fluctuating interest rates and strict deadlines.

Under the Student Investment Plan, graduates will only ever have to pay a stable, predictable fraction of the money they make – that means no loans and no debt.  The plan will also garner the UC enough additional revenue to free it from complete dependence on state funding and make room for long-term institutional growth.

The purpose of the plan is to reestablish the UC as an affordable option for all qualified California students while gradually reducing its reliance on undependable state monies.

Got it? Some of us are still paying our own and family members’ funding for advanced education from all over the country and the concept of colleges “investing” in their students’ futures is a solid one to me. It not only will, eventually, bring in more money to the institutions it will serve to improve the education structure…better classes make better investments.

Fix UC President Chris LoCascio recently presented an update on Fix UC to the UC Board of Regents at their meeting at UC San Francisco. The next steps will involve working with the federal government and UCOP to explore a collection system through the IRS that the UC and other American institutions can use to collect funds from graduates in the United States and abroad. This seems to mean that they are hoping to go beyond UC to other Universities. This is a plan worth getting other schools interested in… however, it should begin with student involvement to make it realistic. Here’s their organizing statement:

Fix UC is a student-created and run organization dedicated to solving the University of California’s funding crisis.

Our goal is to identify root problems and provide long-term solutions to the UC regents, with the hope that they will not only consider, but implement the plan outlined in our UC Student Investment Proposal.

Comments Off on University of California’s FixUC proposes an investment plan to replace growing student loans.