… then perhaps you’d like to know where they got that idea.

Well, they got it from Mittens last summer. 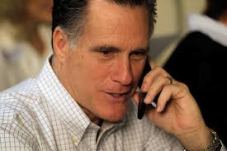 In a June 6, 2012 conference call posted on the anti-union National Federation of Independent Business’s website, Republican presidential candidate Mitt Romney instructed employers to tell their employees how to vote in the upcoming election. In a phone call, after making a lengthy case that President Obama’s first term has been bad for business, Romney said:

Obviously, the Romney campaign is complicit in corporate attempts to influence employees’ votes that have made headlines in the past few days.

On Sunday, In These Times broke the news that Koch Industries mailed at least 45,000 employees a voter information packet that included a flyer endorsing Romney and a letter warning,:

“Many of our more than 50,000 U.S. employees and contractors may suffer the consequences [of a bad election result], including higher gasoline prices, runaway inflation, and other ills.”

In the June call, Romney went on to reassure his audience that it is perfectly legal for them to talk to their employees about how to vote:

Nothing illegal about you talking to your employees about what you believe is best for the business, because I think that will figure into their election decision, their voting decision and of course doing that with your family and your kids as well.

He’s correct that such speech is now legal for the first time ever, thanks to the Citizen United ruling.

Beyond Romney’s statements on the call, it’s unclear whether his election operation is actively coordinating workplace campaigning by businesses. Romney press secretary Andrea Saul did not respond to In These Times’request for comment.However, the conference call raises troubling questions about what appears to be a growing wave of workplace political pressure unleashed by Citizens United.