Watching Romney, Boehner, Ryan and the rest of them on Television, I realize that Republicans lie.

And not just a couple of mistaken notions here and there, but outright lies…some of them so far out that I couldn’t have imagined them if I tried.

Why is it, then, that we let them keep doing it? Why do the news shows repeat these gems in their speeches without pointing out the basic lack of truth? Perhaps there is influence being peddled here.

For instance, Mitt is always saying that Obama has made the recession worse…without mentioning, of course, that the Dow hit its 4-year high and NASDAQ hit its 11-year high under the President’s time in office. Or Chrysler posted its first profit in more than a decade  and  expects those profits to continue growing. The industry has hired enough workers to make up for all those laid off during the recession, and American and foreign automakers plan to add 167,000 jobs at American plants this year. So how has he made the recession worse?

Romney, Ryan and others have said that taxes are skyrocketing under Obama.
In reality, the U.S. tax burden is not only hovering around a historical low — it’s also low compared to other advanced industrialized nations.

Boehner has said that the President has accomplished NOTHING in his first term, ignoring everything from wiping out Osama Bin Laden, saving the auto industry and getting his health care plan PASSED.

According to Romney: President Obama “went around the world and apologized for America.”  Obama, however, has never used the word ‘apologize’ in a speech about U.S. policy or history. Any assertion that he has apologized for U.S. actions rests on an intentionally misleading interpretation of the President’s words.

The Republicans lie about everything. They deny the reality of global warming and the carbon emissions crisis. They deny the responsibility of Reagan and Bush for the deficits that they caused and that Obama inherited (along with a recession). They deny Clinton the credit for the vast economic growth that took place in 1990s as a result of his economic policies and for the fiscal sanity that his policies accomplished. They blame everything on the “liberal” academia and give credit for everything to Republicans, never mind that academic science is behind everything that business sells, and without it capitalism would be nothing more than exchange of basic commodities.

And they repeat this stuff over and over… a trick that Goering used in Nazi Germany when they had control of the media: repeat a lie often enough and people start thinking it is true.

Then there are the two big ones that Republicans try hard not to deny, but continue to perpetuate: that Obama was born in another country and that Obama is a socialist/communist trying to nationalize America’s industries (evidenced in the editorial page press by cartoonists like Glenn McCoy: 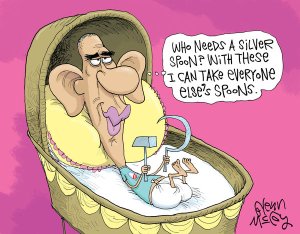 to be an ongoing headache. I’ll just have to make sure that I point them out with some regularity and hope it keeps a few people from buying into this crap.