With the exception of Pakistan, most of the world wants us to elect Obama

Given the amount of investment that Romney has made in companies that benefit China, I find it very interesting that the Chinese are on the Obama backing side,

But what is it about Romney that makes him nore favorable to Pakistan?

Comments Off on With the exception of Pakistan, most of the world wants us to elect Obama

Foreign Policy is the debate subject tonight. What will be discussed?

The one that will probably bring out a major Romney/Obama conflict is the Red Lines question since it deals with holding off nuclear weapons and brings the US into a war-support position with Israel. Since it works against Obama’s State Department‘s policy of negotiations over military imposition, I expect this will be Romney’s major moment. He has spent the last couple of months trying to describe Obama as being unfriendly with Benjamin Netanyahu and opposed to Israel’s rights – a major lie by the Republican, btw – and will most likely make this his position.

Since we haven’t really heard a foreign policy plan outlined by Romney, I expect Obama will keep bringing this lack of knowledge up to see if Romney crosses himself up.

Andrew Sullivan also listed the Foreign Policy subjects that most likely won’t be brought up:

From my point of you, the fact that Romney has publicly stated that Russia was our major enemy, I will be  surprised if Obama doesn’t use this to show Romney’s total lack of foreign policy knowledge. 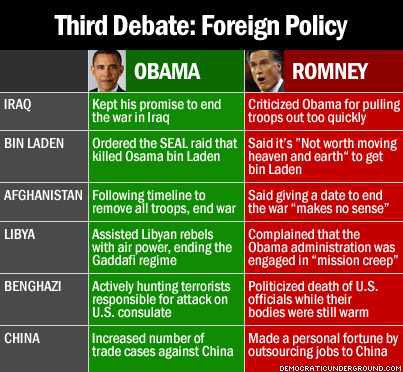 Comments Off on Foreign Policy is the debate subject tonight. What will be discussed?

Richard Grenell has been hounded out of the Romney campaign by anti-gay conservatives.

Romney was reluctant to have Grenell front and center during the recent attacks on President Obama, accused by Romney of politicizing the death of bin Laden. Grenell issued this statement:

I have decided to resign from the Romney campaign as the Foreign Policy and National Security Spokesman. While I welcomed the challenge to confront President Obama’s foreign policy failures and weak leadership on the world stage, my ability to speak clearly and forcefully on the issues has been greatly diminished by the hyper-partisan discussion of personal issues that sometimes comes from a presidential campaign. I want to thank Governor Romney for his belief in me and my abilities and his clear message to me that being openly gay was a non-issue for him and his team.

Now we know Romney would be a President for everyone.

Quote of the Day (Maybe of the Decade!)

“Obama WH already got more from one buffet lunch with Iran than Bush WH did in 8 years of saber-rattling.”

So, are we ready to get behind Obama’s Foreign Policy? Maybe it will prevent one more war.