The questions you ask yourself…

I’m discovering as I face brain surgery and it’s unknown consequences that I find myself asking questions about what I have and have not accomplished over the last 66 or so years. It’s not a pleasant experience, btw, only one that makes me realize how many things I REALLY wanted to do which will probably never be realized. I guess, however, that this is common to just about everyone.

(Sorry… this is much longer than I expected and it will not hurt my feelings if you sign out right now,   – Bill)

Starting with the basics:

And just what did I do that I remember proudly?:

So those are things I’ve been thinking about. What I haven’t discussed here is this blog, which is the major occupation of an old, retired guy’s day. I hope I can keep it going for years (as you can see, I love to talk)… if it has to cease, however, someone will put up a final post.

Time to feed the dogs.

Comments Off on The questions you ask yourself…

Cynthia Huntington is a Finalist for a National Book Award

When the list of National Book Award nominees was revealed, I was pleased to see my old friend Cynthia Huntington nominated for her poetry book, Heavenly Bodies. Cynthia was a fellow at the Fine Arts Work Center in Provincetown for two years while I was Director there in the 70s. I have kept an eye on her work for some time.

Published by the Southern Illinois University Press, Heavenly Bodies has been described as a blistering collection of lyric poems, which give an intimate view of the sexual revolution and rebellion in a time before the rise of feminism. Heavenly Bodies is a testament to the duality of sex, the twin seductiveness and horror of drug addiction, and the social, political, and personal dramas of America in the 1960s.

Echoing throughout are some of the most famous—and infamous—voices of the times: Joan Baez and Charles Manson, Frank Zappa and Betty Friedan. Jinns and aliens beckon while cities burn and revolutionaries thunder for change.

Cynthia Huntington is the author of four books of poetry, including The Radiant (winner of the Levis Prize), The Fish-Wife, and We Have Gone to the Beach, as well as a prose memoir, The Salt House. A former New Hampshire State Poet Laureate, she is professor of English at Dartmouth College, where she serves as senior faculty in creative writing. She served as chair of the poetry jury for the Pulitzer Prizes for 2006.

I congratulate Cynthia sincerely for her current achievement and look forward to reading Heavenly Bodies (and perhaps pass it on to John Case for his Monday morning poetry program.)

I was the Director of the Fine Arts Work Center in Provincetown (MA) in the late 70s, and one of the great men and women I worked for there was Center co-founder Stanley Kunitz.

The Pulitzer Prize winning poet, who died in 2006 at age 101, kept working as he got older. His last published poem was called “Touch Me”  and was written in 2005. As I was looking around the web, I found him doing a live reading at age 100 and felt so good hearing him again.

I used to visit with him as he worked on his beloved garden in P-Town. We’d talk about flowers and poets and just about anything. Stanley could always maintain a stimulating conversation.

Just imaging an artist of Kunitz’s stature maintaining his literary power right up to the end of his life gives me a great deal of optimism that we can all maintain our creativity in the face of an anti-creative world.

Thanks for the memory, Stanley.

Comments Off on Stanley Kunitz remembered…

When I became the Director of the Fine Arts Work Center in Provincetown, MA in the 70s, one

of the framed images in my office was of Helen Frankenthaler and her then husband Robert Motherwell standing in front of “The Barn,” an old painting studio at Day’s Lumberyard, which later became the Center’s property. It reflected summer, when a large number of NYC abstract expressionists headed to the end of Cape Cod to vacation and paint and drink cocktails together. Franz Klein, Myron Stout, Jack Tworkov, Hans Hoffman and others made the tip of the Cape an exciting place.

When the FAWC started, “The Barn” became studio space for our own artists, but it was clear that the space was haunted by memories of Frankenthaler who, after breaking up with Motherwell, moved her summer studio to Long Island. We always felt like she was part of our lives.

seriously by critics and peers (Hans Hoffman once commented ‘who would believe this work was done by a woman?’), yet she became famous, highly thought of, commected sand a presence in major museums.

Aside from her paintings, Ms. Frankenthaler was known for her lithographs, woodcuts, etchings and screen prints which she started makinfgin the 60s… indeed, some critics have suggested that her woodcuts have made her most original contribution to printmaking.

Frankenthaler died at age 83 on Tuesday at her home in Darien, CT.

Comments Off on Helen Frankenthaler dies at 83… 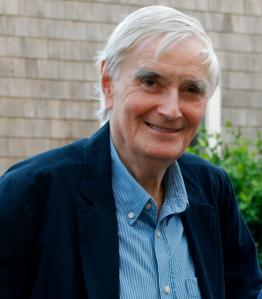 According to the NY Times, Budd Hopkins, a distinguished Abstract Expressionist artist who — after what he described as a chance sighting of something flat, silver, airborne and unfathomable — became the father of the alien-abduction movement, died on Aug. 21 at his home in Manhattan. He was 80. I only discovered this today and I’m sorry to be just getting around to it. I knew Budd at the beginnings of his UFO phase when he was an advisor to the Fine Arts Work Center in Provincetown, MA, during my period as Director.

Budd at that time was married to the second of his three wives, art historian and critic April Kingsley, and they lived in a futuristic

Artwork by Budd Hopkins in the 1980s

concrete cottage that looked a lot like one of Budd’s paintings, in Truro. It wasn’t long before his artwork was overshadowed by his observation of a “UFO” and the publicity it gained. Being a member of the circle of New York artists that in the 1950s and ’60s included Mark Rothko, Robert Motherwell and Franz Kline, Budd had access to the press and was somewhat of a celebrity in summers on the Lower Cape.

Budd’s UFO sighting occurred on Cape Cod in 1964. After that he researched other sightings, people who claimed to have been abducted, and the government’s denial of the existence of any such phenomena. He was quick to point out that he had never been abducted.

He wrote about his experiences as a UFO researcher in his memoir, “Art, Life and UFOs,” published in 2009 by Anomalist Books.

B. H. Friedman… Novelist and Biographer… Dies in Manhattan at 84

I knew Bob Friedman in Provincetown in my Fine Arts Work Center days back in the seventies. He was an advisor to both the Writing and the Visual arts programs and was best known for his biography of Jackson Pollock.

I first met B. H. Friedman before I started at the FAWC as a friend of Hudson and Ione Walker whose house I was staying in on a Provincetown summer break. He was an interesting conversationalist and a friend to most of the well known artists who summered in P-Town.

He was well known as a New Yorker writer, too. The cause of death was complications of pneumonia, according to, Daisy Friedman, in the NY Times obituary.

Comments Off on B. H. Friedman… Novelist and Biographer… Dies in Manhattan at 84

Sorry to see that Norris Church Mailer has died..

Back in the late seventies, when I was director of the Fine Arts Work Center in Provincetown, MA, Norris Church Mailer, then the wife (I guess she was his last) of Norman Mailer, was on my fundraising list, as were most NYC celebrities. As I recall she was a very nice woman and mother to one of Mailer’s several children.

Mailer died three years ago and Norris Church Mailer died on Sunday, of gastrointestinal cancer that she had battled for 11 years, in Brooklyn Heights, NY.

She was a former Wilhelmina model who met Mailer while getting an autograph 0n his book on Marilyn Monroe. Her own memoir, “A Ticket to the Circus,” was published earlier this year.

Comments Off on Sorry to see that Norris Church Mailer has died..