To answer a question received by e-mail…

…yes, I change the background pattern on the blog every day (or two) and try my hardest never to repeat a pattern. 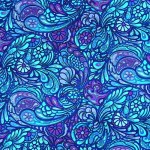 I spend a lot of time searching for new patters that will make the blog stand out. Following users comments I stopped using moving images a while ago since they

detract from the posts. I do, however look for color that makes the pages stand out and patterns that make me relatively happy (like the “Paisley” I have up today.)

If you have a pattern you haven’t seen here that you’d like me to use, click on the mailbox and attach it to the e-mail.

Goodbye to Jackie Cooper, one of the favorite actors of my childhood and early adult years. From the “Our Gang” comedies, through years of motion pictures, early television comedy and up through films like “Superman” where he was seen as Perry White, Cooper gaver us decades of talent.

One particular memory I have was being in the live studio audience at age 12 for a TV comedy he was doing from NYC… yes those were the days without videotape… the days of “live television.”

Cooper was also known for the fact that at age 9 he became the youngest Oscar nominee for best actor (a record that he still holds), in “Skippy” (1931).

Here’s Jackie in the 50s TV serial “The People’s Choice”:

Here’s a piece from Film Industry News by Mike Stringer (which I picked up at Movies I Didn’t Get). Terry Gilliam, filmmaker, animator and former Python, is producing this view of the Future as seen by the past… in Victorian Steampunk style.

And here’s the Promotional Trailer from 1884:

Comments Off on 1884… here’s a film I’m really looking forward to.

I’m getting ready to meet Candi from the American Conservation Film Festival for coffee at Mellow Moods at 10:00. We’re going over the stuff I’m filling in on their website database for people looking up the 30 or so films (features and shorts) that are now scheduled.

Once everything is up and running, I’ll direct my readers to the site… this is a film festival that Elly and I have been going to for several years now and we always enjoy it (and learn from it.)

One of the films I’m looking forward to is “Confessions of an Eco-Terrorist”:

Seen through the eyes of activist Peter Jay Brown (“Whale Wars) Confessions offers an intimate look at shipboard life amongst members of the Sea Shepherd Conservation Society. These self-proclaimed animal saviors and sea rebels immerse themselves in action-packed conflict including ramming illegal fishing vessels, sinking pirate whalers, and arguing amongst themselves over a vegetarian vs. vegan diet.

I’ve got to pack up and get out of here… more later.

Comments Off on Working Morning

A Quote for the Day – He must have loved watching George W. Bush on the International News…

“Stupidity is infinitely more fascinating than intelligence. Intelligence has its limits while stupidity has none. To observe a profoundly stupid individual can be very enriching, and that’s why we should never feel contempt for them.”

She was the editor for Bonnie & Clyde and Dog Day Afternoon and, my personal favorite, Reds. During the 1990s she ran the editing dept. at Warner Brothers.

From the article in Salon:

Scored to Elton John’s “Amoreena,” the only piece of music in an otherwise score-free film, it’s a tribute to Brooklyn and to the urban experience in general. It’s also a burst of tough lyricism that’s more characteristic of Allen than of “Dog Day” director Sidney Lumet, a director not known for poetry. It can (and thanks to YouTube, does) work as a time capsule and as a self-contained work of art that can be watched and savored again and again.

I loved ARRESTED DEVELOPMENT … I hope they make the movie!

Comments Off on I loved ARRESTED DEVELOPMENT … I hope they make the movie!

A television series on the Kennedys that is nearly a year away from official release has already spurred heated debate and aggressive pushback over its treatment of the iconic American family.

On Tuesday progressive filmmaker Robert Greenwald released a short video preemptively calling into question the accuracy of “The Kennedys,” an eight-hour miniseries which will air on the History Channel and is being produced by Joel Surnow, the creator of the series “24” and a well-known Hollywood conservative.

Please sign the petition that Greenwald’s short links to and prevent “The Kennedys” from being released.

Comments Off on Stop Kennedy Smears

Me and Orson Welles

Elly and I got to see “Me and Orson Welles” last night, a 2008 film by Richard Linklater that we had missed on the first round (I don’t remember it playing anywhere around here… the problem with living out in the country).

This is a lovely film about the famous presentation of JULIUS CAESAR in 1937 by Welles’ Mercury Theatre, which included such people as Joseph Cotten, Martin Gable and John Houseman all circling around Orson and his ego. The plot concerns a high school student (Richard) who gets a small part in the production and how it changes his perception of life in the theatre and the great man himself.

The visual quality of this film is amazing (although I did spot one teeny visual anomaly… in a view of people on the street in 1937, amid old cars and perfectly set costume, there was a brief flash of a blue mailbox… something that would have been a dull dark green in the thirties.) And the acting was just wonderful – especially Christian McKay’s Welles (playing Brutus in the stage piece) and James Tupper’s Joe Cotten.

The actual scenes from the famous “fascisti” interpretation of Shakespeare’s CAESAR brought back my Theatre History class in the sixties at Northwestern. It would have been great to actually have been there – but the research done by Linklater and company was exceptional and you get a great sense of what it must have been like.

According to the credits, the theatre interiors were apparently filmed on the Isle of Man, off the British coast, which my wife informed me was where the English exiled Jews in the WWII years as unwanted aliens. Given the amount of characters from this view of the past who were Jewish, this is an interesting fact.

Back to basics, however. Rotten tomatoes gave this a 93, which is very high for them. I agree… if you haven’t seen it and it;s not playing in any second run art house bear you, go rent it.

Comments Off on Me and Orson Welles

Gilliam revealed Ledger improvised “half” of his comedic dialogue on set. “I really felt ‘We got a tiger by the tail here! I thought here’s somebody with the kind of energy I had when I was young.” When Ledger died in the midst of production, the role was recast to have Johnny Depp, Jude Law, and Colin Farrell portray “physically transformed versions” of the character.

And Tom Waits plays the Devil!

Comments Off on Is Terry Gilliam’s Masterpiece Coming in December?

I’m not going to be in NYC or LA at the end of the month, so it is highly unlikely that I will see “Collision” right away. What is it? A film about debates between known atheist Christopher Hitchens (author of God Is Not Great) and Douglas Wilson, a Christian Cleric on whether or not Christianity is good for us. It was put together by filmmaker Darren Doane.

And here’s the poster (blow it up, print it out, and hang it on your bulletin board): 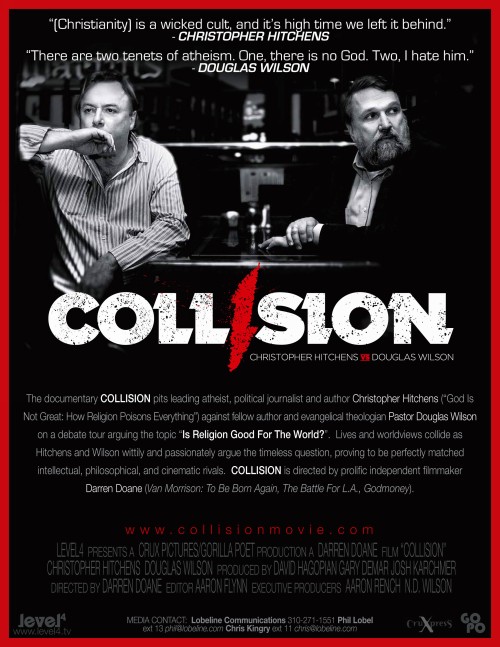 If you don’t get to see it around October 29th, I understand there will be a DVD available. Their web site, http://www.collisionmovie.com, says it will be available at Amazon.com.

Comments Off on Collision: Hitchens Vs. Wilson

… so I turn on the Documentary Channel and start watching an independent film called 10 mph. Never heard of it… here’s the description and a way you can see it for free if you don’t get DOC on your cable (and you’ll also contribute $1.00 of someone else’s money to the filmmakers):

10 MPH is a comical documentary that follows a pair of aspiring filmmakers as they quit their jobs and turn a friend’s ludicrous idea into a movie. The impulsive purchase of a two-wheeled Segway scooter sets this story in motion when the two friends decide to travel from Seattle to Boston at 10 MPH in an attempt to change their lives forever… What ensues is a road trip like none other with a haphazard cast of characters you could only find on a zany 100-day trek through America’s back roads. Each poignant story the two friends discover along the way inspires a craving inside to go out and do that thing you’re supposed to do.

This is the entire feature-length version (92 mins) of 10 MPH. It’s divided into 7 parts, but will play in order automatically.

PLEASE HELP OUT. Send this link to all of your friends: ourstage.com/go/10mph. They’ll get to download 10 MPH for FREE & the filmmakers will get $1.

Sometimes there is value in not sleeping… this is a FUNNY movie (and I don’t get a red cent out of it… just making a recommendation.)

If you think the Religious Right has no power, think again…

CREATION, a new film produced by the BBC, has won major awards but can’t find a distributor in the US, even though The Hollywood Reporter has said: “It would be a great shame if those with religious convictions spurned the film out of hand as they will find it even-handed and wise.”

Here’s part of the artical from the London Telegraph:

Comments Off on If you think the Religious Right has no power, think again…

We’re having one of those sweeps of people dying, but this is one I never expected. I’ll pull this entire quote from Variety:

John Hughes, director of culturally significant films such as “The Breakfast Club,” “Ferris Bueller’s Day Off” and “Planes, Trains and Automobiles,” died suddenly today of a heart attack while taking a morning walk during a trip to Manhattan. He was 59.

John Wilden Hughes, Jr., born on Feb. 18, 1950 in Michigan, began as an advertising copywriter in Chicago.

In the last decade, he stepped back from the legacy he created to enjoy time with his family, maintain a functioning farm in northern Illinois and support independent arts. He is survived by his wife of 39 years, Nancy, two sons, John and James, and four grandchildren.

Comments Off on John Hughes Dead at 59

Heinz Edelmann, the artist who created the animated Beatles in the movie Yellow Submarine in 1968, died in Stuttgart, Germany at age 75.

The name may not be one that sticks in our heads the way the designs do. His friend Milton Glazer said:

“He became famous because of his work on ‘Yellow Submarine, but that celebrity actually obscured his real talent and imagination.”

He illustrated such things as the West German first edition of Lord of the Rings and designed the mascot for the Expo ’92 Worlds Fair in Spain.

Comments Off on Heinz Edelmann Dies

David Carradine has been found dead in Bangkok, Thailand, an apparent suicide by hanging.

The 72-year-old actor, best known for the Kung Fu television series and the Kill Bill movies was in Thailand to make a film. The police say it was suicide and have ruled out an assault.

From a famous acting family, David was the son of John Carradine and the brother of Kevin Carradine.

I remember back in the seventies when the Kung Fu series was a great influence on the Martial Arts movement in this country and one of the reasons Berta Walker and I produced John Driver’s martial arts musical, RIDE THE WINDS, on Broadway.

I’m sorry to read about this death… Carradine was an actor whose work I liked.