Intro to Solar Class Offered at No Cost to WV Residents

Thanks to a state grant, Mountain View Solar, in partnership with Blue Ridge Community and Technical College, will be offering “Introduction to Solar Energy Systems” in Berkeley Springs, WV and in Martinsburg, WV. The class is available at no cost to WV residents and can be taken for college credit and as a requirement toward a NABCEP certification.

The class will be held on Tuesdays from 6-8:30 PM from September 11 through November 13, 2012. There are still spots available for students who are interested in a career in solar energy or simply interested in how solar works.

A Quote on Gas Prices…

We’re hearing the primary campaigners accuse President Obama of personally seeing to it that gas prices have gone to extremes (I saw one station at 3.95 a gallon in Charles Town yesterday). Well, I think we should hear what the President has said on the subject:

“You can bet that since it’s an election year, they’re already dusting off their 3-point plan for $2 gas — and I’ll save you the suspense: Step one is to drill and step two is to drill. And then step three is to keep drilling. We heard the same line in 2007 when I was running for President. We hear the same thing every year. We’ve heard the same thing for 30 years. Well, the American people aren’t stupid. They know that’s not a plan, especially since we’re already drilling. That’s a bumper sticker. It’s not a strategy to solve our energy challenge. That’s a strategy to get politicians through an election.” -Barack Obama

Frankly, if any of those yo-yos (Newt, especially, who is left with not much else to push than this) could actually get gas down to $2.00 a gallon they have enough congressional support to do it now.

Have you wondered why they don’t?

Just got back from a Solar Project lecture at Town Hall 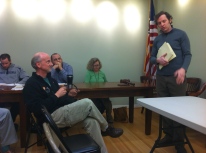 Than Hitt starts it off...

Sustainable Shepherdstown had David Brosch of University Park Solar LLC from Maryland to discuss how that organization created an investor solar project, got some state laws changed, and got small investors involved in solar energy.

This is the project that Than Hitt spoke about on my radio show last Saturday, and the show and a Sustainable Shepherdstown mailing brought in about 30 people (would have been more if the Chronicle had run the release, but it didn’t.) 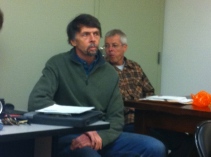 The concept of setting up a (small) profit-making LLC to get groups of people involved with solar power for multiple locations with a 20 year profit of about 7% (money deducted from the electric bill). It has been successfully started in Maryland and could be done in West Virginia.

This was a good start and everyone left Town Hall interested to take it further.

Green Drinks is a group that gets together once a month so that people with interests in conservation, green energy and related subjects can interact with each other. Elly has been going to this since it relates to Sustainable Shepherdstown. Tonite I went along with her.

There was a speaker this evening, something I’m told doesn’t usually happen at these events. His name is

John Amos and his company is SkyTruth. This is an organization which uses satellite and aerial photography to evaluate the effects of oil drilling and shale fracking and other destructive things that people do to the earth. He has been especially involved with viewing BP’s oil leak history in the Gulf.

Amos gave a slide presentation with amazing pictures that got us all worked up and had us considering what we could do to help correct the situation… not an easy thing to do.

More on the solutions later.

I just spent some time looking at the Solar Roadways site… What a great idea!

When we talk about getting away from oil, coal and other carbon power sources and toward wind and solar, very few ideas seem to be massive enough to solve the problem. Lately we are seeing proposals for massive off-continent wind farms (Massachusetts and Maryland are currently pushing these) and other projects. But the idea of the Solar Roadway is not one we hear a lot of.

Take a look at this:

Here’s where to go to explore the project: http://solarroadways.com. It’s full of information to get your

interest up… you can even see their TED presentation where Scott Brusaw was given 18 minutes to present it. It’s a really successful 18 minutes and worth your time.

A statement like this makes me wonder why the government isn’t getting involved here:
Everyone has power. No more power shortages, no more roaming power outages, no more need to burn coal (50% of greenhouse gases). Less need for fossil fuels and less dependency upon

foreign oil. Much less pollution. How about this for a long term advantage: an electric road allows all-electric vehicles to recharge anywhere: rest stops, parking lots, etc. They would then have the same range as a gasoline-powered vehicle. Internal combustion engines would become obsolete. Our dependency on oil would come to an abrupt end.

If you are really interested in alternative power, go have a look at the Solar Roadways web site.

Comments Off on I just spent some time looking at the Solar Roadways site… What a great idea!

I’m waiting to hear from Brown’s Automotive on what’s wrong with my car. They told me on the phone that it might be a head gasket problem, which John Case informs me might just mean a dead car. It will be pretty expensive to get it running again and, as usual, I don’t know where the money will come from. The car used just about all of my Social Security money last month. My wife says we can’t afford that again… and besides, these little ischemic attacks I have that I’m getting tested for may come to mean that they won’t let me drive anyway. My existence is getting much smaller.

I have to arrange rides and pickups to get through my lighting commitment to Thurber Carnival. That’s

not too difficult. Several of the cast members drive near my home when they come in to rehearsal or the show and I can get picked up or dropped off after. I just wish it were over with and I had one less thing on my mind.

It may be getting to be time to end this blog. It’s something I’m thinking seriously about right now. It takes a lot of energy and focus to keep it up… I’ve been doing it for six years, starting when I was actually gainfully employed and feeling pretty good about everything, and operating now in a place where I wasn’t able to get reemployed and had to retire earlier than I wanted to and my health is starting to take a dive. The blog is just one more thing… It doesn’t bring in enough money from font sales to

do more than buy a couple of bottles of seltzer every other month and it doesn’t have any effect on changing the depressing politics and middle-class decline in this country. As one of that middle class that has suffered the decline, I don’t see a way out of it (unless a big move to hire carless 64-year-olds pops up somewhere around Shepherdstown, WV, where I am now trapped.)

I’ll make a decision on the blog in the next couple of days. Meanwhile, I’m going to start looking through my stuff to see what I can put up on eBay.

Brown’s has an estimate of at least $1500.00 and maybe up to $2000.00 on my car (they won’t know until they take the engine apart.) I called and left a message on my wife’s office machine with the price, but I’m pretty sure we can’t handle it and it looks like I’m going to be permanently without a car.

If I was depressed before, it is a deep pit now.

My Car will now not be done until noon tomorrow…

together until the late morning. This will only add hourly charges and watch the whole thing go beyond the $1200.00 they estimated yesterday.

That blows my evening out of the water, too. I was going to go to the Thurber Carnival rehearsal at Full Circle tonite to work on the lighting plot… looks like the next rehearsal I’ll be able to get to is Monday.  John is going to express my

regrets to the Director, as he has to be at rehearsal at 7 PM. They haven’t run both acts in sequence and I have plenty of time to get the lighting down.

And life goes on…

“I’m not going to kick the can down the road …. If it makes me a one-term president, I’m going to, we’re going to take it on because the country is in need of us taking this on.”

Thanks to Alex Koppelman in Salon.

Comments Off on Quote of the Day

The vote for the American Clean Energy Security Act on the House floor came to an ultimate margin of a mere seven votes, 219-212. Despite the Republican leader Boehner’s over an hour “minibuster” on the 300 page Manager’s Amendment, despite 44 Democrats who sided with the Minority…and with 7 Republicans joining the Majority… the House has now passed the first step in attacking global warming and reducing pollution.

Now Obama’s Cap and Trade bill goes to the Senate, where it is likely to be equally as close. This will require more e-mails and calls from voters like us to our Senators. Everybody ready?