William Hanley, who received critical acclaim as a Broadway and Off Broadway playwright in the 1960s and who later won Emmys for television scripts, died on May 25 at his home in Ridgefield, Conn. He was 80.

The cause was complications of a fall, his daughter Nell Hanley said.

Mr. Taubman was reviewing two Off Broadway one-act plays by the playwright: “Whisper Into My Good Ear,” a portrait of two old men who share their loneliness living in a fleabag hotel and plan to commit suicide together; and “Mrs. Dally Has a Lover,” about a married woman and her romance with a teenager.

“His style is lean and laconic, shading almost shyly and unexpectedly into tenderness and poetry,” Mr. Taubman wrote. “His perception of character is fresh and individual.”

Those plays would earn a Drama Desk Award for Mr. Hanley in 1963. A year later his “Slow Dance on the Killing Ground” opened on Broadway. Set in a shabby luncheonette in a desolate factory district in Brooklyn, “Slow Dance” tells of three strangers who bare their wounds over several hours: the storekeeper, who is a non-Jewish refugee from Nazi Germany; a schizophrenic black youth, who has an I.Q. of 187; and a teenage girl, who is searching for an abortionist.

“Slow Dance on the Killing Ground,” The New York Journal-American wrote in a profile of Mr. Hanley, “has been received by critics with the enthusiasm usually reserved for a Mary Martin musical.” But the accolades, and a Tony nomination, did not provide commercial success. “Slow Dance” ran for 88 performances; the Off Broadway plays had closed within a month.

Comments Off on William Hanley, Playwright and TV Writer, Dies at 80

The Tonys are tomorrow night and I’m curious… 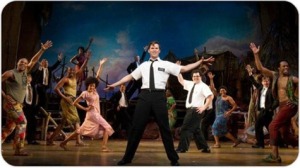 from the best nominated Musicals. Mormon is up for 14 Tonys, and although it probably won’t win them all, as the Drama Desk Awards showed last week, it is sure to take SOMETHING home.

I’ve been playing the album over and over on my iPhone and I think the piece that stands the best chance is the opening number “Hello,” yet that doesn’t show the experience in Uganda which makes up the body of the work. The songs in Uganda pose the biggest problems for television which cannot easily take “fuck you, God” or any and all the messages about the clitoris, or even the closing scene, which is a variation on “Hello” also full of the F word.

I must sat, I love the score and the story, however. I wish I was in New York so I could go see it (where apparently, it is frequently sold out.) It’s going to be a long time, if ever, before this gets to the Community Theatre market.

The Drama Desk (www.dramadesk.org) was founded in 1949 to explore key issues in the theatre and to bring together critics and writers in an organization to support the ongoing development of theatre in New York. The organization began presenting its awards in 1955 and it is the only critics organization to honor achievement in the theatre with competition between Broadway, Off Broadway and Off-Off Broadway productions in the same categories.