The polls are coming in as of Friday reviewing the presidential campaign after the Democratic National Convention.

The Rasmussen and Reuters/Ipsos surveys  showed Obama with a lead. In the Rasmussen tracking poll, a three-day average which has tended to show better results for Romney, Obama led 46%-44% among likely voters surveyed, up from a 1-point deficit on Friday and a six-point swing upward since the Republican convention.

Pollster Scott Rasmussen noted that for the first time in his survey, Democrats were now following the campaign as closely as Republican voters, a measure that often predicts turnout.In the Reuters/Ipsos poll Obama led Romney among likely voters by 47%-44%, up a point from Friday’s three-point lead.

Since Romney scored no upgrade after the RNC, Obama’s lift as of Friday is an interesting factor.

Why I think very little of Fox News. 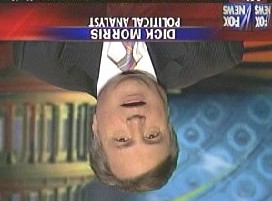 On Fox News’ “The O’Reilly Factor” last night, onetime Bill Clinton ally (now foe) Dick Morris suggested the former president secretly wants Barack Obama to lose the election but won’t say so publicly because the Obama administration is holding Hillary Clinton hostage and it will kill her if he loses.

The look on Bill O’Reilly’s face and the tone of his voice during the interview demonstrates that even he thought Morris’ suggestion was ludicrous, though it is rather appalling that the two men appeared to laugh at the supposed “joke.”

Morris made the suggestion before Clinton’s endorsement of Obama’s re-election campaign during his well-received Democratic National Convention speech.

A congregation of assholes, no?

TPM has posted a 100 second summary of last night’s DNC. I love these things:

Comments Off on Last night’s convention in 100 seconds…

Quote of the Day – from last night’s keynote speech…

Some of you may have missed Clinton’s speech due to football or the lateness of it’s presentation (if you are an early sleeper like me), so here it is in it’s entirety:

Kal Penn Speaks to the convention…

Kal Penn who served for two years as Obama‘s representative to young people… he has done much more than make Harold and Kumar movies.

His speech was fun, but not carried on all the networks… so here it is:

Comments Off on Kal Penn Speaks to the convention…

Convention Video: The stories of our platform

This makes the Democratic platform have more understandable content.

Comments Off on Convention Video: The stories of our platform

Harold and Kumar Go to the Democratic National Convention

One of the things I like about Obama and the Democrats that I didn’t see with Romney and the Republicans: they have a sense of humor.

Kal Penn will be hosting live coverage of the convention on BarackObama.com.

Quotes of the Day – Diversity of the Democratic National Convention

Remember last week when the Republicans put up black, woman, hispanic and other speakers (in front of the virtually all white audience) and said their convention represented a much more diverse America than the Democrats ever could? Well, they ought to take a look at a convention where the speakers AND the conventioneers are made up out of a great mix of Americans.

“This is truly the most diverse, the most open, the most transparent, the most exciting convention we’re about to undertake. It is big, it is bold, it is beautiful, it is America.”

“We’re doing things a little different than the Republicans. A lot more delegates, Latino delegates, African Americans, women. In addition to having very prominent roles like the keynote speaker, and in my case chairing the convention, you’ll also see that our platform reflects our values.

Makes me proud to be a Democrat.