So how is the British press reacting to Mitt? 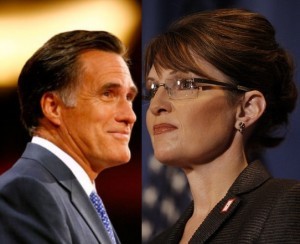 Take your pick… some in London prefer Palin

Romney is certainly giving the English Press a lot to talk about on center spreads, while Olympic coverage takes the front pages. Their reaction to Mitt has gone from openness, to skepticism, to mocking, to concluding that Mitt Romney is worse than Sarah Palin.

Take Daily Mail Political Editor James Chapman, whose cen6ter spread was topped with a two page headline: Romney is a Party Pooper. He has been providing the world a play by play of Romney’s British implosion via his Twitter account, starting off by criticizing London’s preparedness for the Olympics, then forgotname of British Labour Leader Ed Miliband, and then he admitted that he had been given a secret briefing by MI6. This led the British to ask aloud if they have another George W. Bush on their hands:

“Romney blunders again by revealing he’s had (supposedly) top secret briefing by John Sawers, MI6 boss. Do we have a new Dubya on our hands?”

After his visit to Whitehall, Chapman offered two of the kinder reviews of Mitt Romney:

“Serious dismay in Whitehall at Romney debut. ‘Worse than Sarah Palin.’ ‘Total car crash’. Two of the kinder verdicts. Another verdict from one Romney meeting: ‘Apparently devoid of charm, warmth, humour or sincerity’”

Getting compared to Sarah Palin is one thing, but being called worse than Palin is an indication of the mistake Romney has made by being in London in the first place.

“Quite a moment from the Mayor of London Boris Johnson. Shortly after Rix had lit the flame he really went for it in Hyde Park. He referenced Mitt Romney’s ‘London isn’t ready’ quip and shot back in style. “Are we ready?” he called and the crowd went wild. There may even have been a hint of the Obama-friendly “Yes we can!” in there – he may have jumped into a winning scenario but I’ve not heard a politician get that reaction before.”

Comments Off on So how is the British press reacting to Mitt?

This is from Musicians For Freedom, a blog out of Denver, Colorado.

Officials at Monsanto — a multinational agricultural biotechnology corporation and leading producer of genetically engineered seed — said the company is closing its wheat growing operation, based in Cambridge, which employed 125 people, and selling off crop-breeding centers in France, Germany and the Czech Republic, the Daily Mail reported.

Monsanto made its decision public shortly before the British government’s final announcement on the prospects for GM food, and after research in Britain found GM farming would have long-term negative impacts.

Three studies conducted for the Department for Environment, Food and Rural Affairs found pollen contamination would spread far further than previously believed, “feral” growth of weed killer would persist for years and the heavy use of chemicals associated with these crops could wipe out some species of birds.

The government’s findings involved hundreds of public meetings and 37,000 questionnaires. Ninety-three percent of respondents said not enough was known about the long-term effects of these foods on health, and 86 percent said they would refuse to eat the GM food.

OK… that’s Germany and Britain who are protecting their population. Why in hell aren’t we?