Bill Nye the Science Guy is a true hero…

… but he did not, as a mischievously placed article put out by the Daily Currant stated, use foul language and push science versus creationism arguments challenging Todd Akin to a debate.

This happened after a video was released on You Tube saying evolution is the fundamental idea in all of life science, in all of biology. According to Bill Nye, aka “the science guy,” if grownups want to “deny evolution and live in your world that’s completely inconsistent with everything we observe in the universe, that’s fine, but don’t make your kids do it because we need them.”

Just for your entertainment, however, here is Bill Nye on Seattle’s “Almost Live” in his superhero guise as Speed Walker:

NEW YORK (Reuters) – Scientist and children’s television personality Bill Nye, in a newly released online video, panned biblical creationism and implored American parents who reject the scientific theory of evolution not to teach their beliefs to their youngsters.

“I say to the grownups, ‘If you want to deny evolution and live in your world that’s completely inconsistent with everything we’ve observed in the universe that’s fine. But don’t make your kids do it,'” said Nye, best known as host of the educational TV series “Bill Nye the Science Guy.”

If I were a professional educator, I would give Bill Nye my thanks for coming out with this video:

Evolution is the fundamental idea in all of life science, in all of biology. Creationism is not.

Gallup has released the results of a national poll on science, and unfortunately, modern biology didn’t fare well:

“Forty-six percent of Americans believe in the creationist view that God created humans in their present form at one time within the last 10,000 years.” 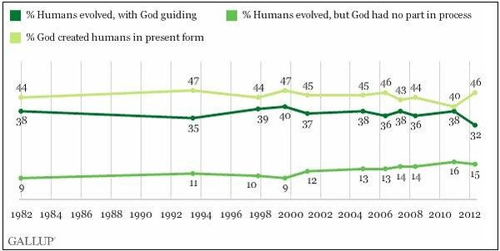 In fact, only 15% believed in evolution with God playing no part in everything (ie: the major premise of modern science.)

Here in America we used to have a competitive edge in science… now we are falling way behind competing countries. We need to start taking science seriously again —  ignorance costs far too much. Results such as those of the Gallup poll should serve as a wake-up call.

Neil deGrasse Tyson gave a lecture a few years ago on the “philosophy of ignorance,” in which he said a lack of appreciation for basic scientific principles will hurt America’s scientific output, which has traditionally been the nation’s largest economic engine.

“If nonscience works its way into the science classroom, it marks … the beginning of the end of the economic strength this country has known,” Tyson said.

If you care about American economic competitiveness you have to care about science.

If you want to know why having Republican majorities in either part of Congress or in the Presidency is so scary: