Judy Woodruff interviews Sen. McCain on the money the Citizens Union decision has brought into the fray…

Here’s part of the interview:

JUDY WOODRUFF: But in the wake of the Supreme Court decision Citizens United, we are seeing enormous sums of money going into this campaign, to the campaigns themselves, to outside supporters.

Is this — is it just inevitable that we’re now in a period where money is going to be playing this dominant role in American politics?

SEN. JOHN MCCAIN: I’m afraid, at least for the time being, that’s going to be the case, because of the most misguided, naive, uninformed, egregious decision of the United States Supreme Court I think in the 21st century.

JUDY WOODRUFF: You mean one of the justices?

SEN. JOHN MCCAIN: One of the five Supreme Court justices that voted to invalidate what we know of as McCain-Feingold.

Bom-pa-da-bom! So not all Conservative Republicans are married to the five reactionaries on the Supreme Court. Maybe there is a future after all.

Go over to Crooks and Liars and see the whole, revealing interview.

Comments Off on Judy Woodruff interviews Sen. McCain on the money the Citizens Union decision has brought into the fray…

This Press Release went out from Senator Whitehouse’s office on Friday:

U.S. Senators Sheldon Whitehouse (D-RI) and John McCain (R-AZ) today filed an amicus brief with the Supreme Court that details the explosion of anonymous political spending since the Citizens United decision.  The brief was filed in a case regarding a Montana law that bars corporations from funding election ads.  The case presents the opportunity for the Court to clarify the authority of Congress and state legislatures to address the threat of corruption posed by this spending.

“We are deeply concerned about the rise of unlimited, anonymous money now flooding our elections,” Whitehouse and McCain said in a joint statement.  “This unregulated and unaccountable spending invites corruption into our political process, and undermines our democracy.  We urge the Supreme Court to make clear that legislatures can take appropriate actions against corrupting influences in campaigns.”

The Senators’ brief, filed in American Tradition Partnership v. Bullock, asks the Court to deny a petition to review a Montana Supreme Court decision which held that the Montana legislature’s ban on corporate election spending was still constitutional following Citizens United.  Failing that, the brief asks the Court to give the Montana case a full review in light of the flood of anonymous money that has entered political campaigns since Citizens United.

The brief urges the court to “revisit Citizens United’s finding that vast independent expenditures do not give rise to corruption or the appearance of corruption,” arguing that rules requiring donor disclosure and prohibiting outside groups from coordinating with campaigns have been evaded and manipulated by politically-active groups and individuals.  The brief chronicles the extensive coordination that takes place between campaigns and super PACs, and the means of “identity-laundering” that allow secret donors to hide their activity.  The legislators conclude that “the campaign finance system assumed by Citizens United is no longer a reality, if it ever was.”

The Senators have both been leading advocates on campaign finance issues.  McCain was a co-author of the landmark Bipartisan Campaign Reform Act, or “McCain-Feingold,” which limited corporate expenditures on political ads, and which was partially struck down by Citizens United.  Whitehouse has introduced legislation this year that would require enhanced disclosure of spending on political ads.

This is something all Americans from all political backgrounds should get behind… unless you want 8 or 9 rich guys putting out whatever crap they want to sway elections. The Supreme Court stuck us with this in “Citizens United” and it is their responsibility to bring back the basics of democracy (and let’s stop pretending Corporations are citizens.)

Some excerpts on his commentary on the Supreme Court vs. the Health Care legislation:

Three days of Supreme Court arguments over the health-care law demonstrated for all to see that conservative justices are prepared to act as an alternative legislature, diving deeply into policy details as if they were members of the Senate Health, Education, Labor and Pensions Committee.

Senator, excuse me, Justice Samuel Alito quoted Congressional Budget Office figures on Tuesday to talk about the insurance costs of the young. On Wednesday, Chief Justice John Roberts sounded like the House whip in discussing whether parts of the law could stand if other parts fell. He noted that without various provisions, Congress “wouldn’t have been able to put together, cobble together, the votes to get it through.” Tell me again, was this a courtroom or a lobbyist’s office?

It fell to the court’s liberals — the so-called “judicial activists,” remember? — to remind their conservative brethren that legislative power is supposed to rest in our government’s elected branches.

The irony is that if the court’s conservatives overthrow the mandate, they will hasten the arrival of a more government-heavy system. Justice Anthony Kennedy even hinted that it might be more “honest” if government simply used “the tax power to raise revenue and to just have a national health service, single-payer.” Remember those words.

…a court that gave us Bush vs. Gore and Citizens United will prove conclusively that it sees no limits on its power, no need to defer to those elected to make our laws. A Supreme Court that is supposed to give us justice will instead deliver ideology.

See what I mean. Clear and concise with an ability to combine seriousness with humor. After all, we have to live with this stuff.

Bill Moyers made a great remark to Colbert:

I don’t get to stay up late at night if I’m subbing for John at WSHC the next morning, so I didn’t see Stephen Colbert‘s show until this morning when I returned from the broadcast. I was

glad to see he had Bill Moyers on as a guest… Moyers, after two years being away from television, is coming back this month with a new series, Moyers & Co., on Public Broadcasting.

He’s coming back because of his worries about where the moneyed corporations at the top are taking a government which, given their super PACs and lobbyists (and major office holders), have spent 30 years destroying the Middle Class.

Colbert, of course, did all he could to trap Moyers with his pseudo conservative comments (while letting Bill get in the information he wanted to get across), and the discussion came around to whether corporations were people a la the Citizens United decision.

Moyers caught him with a great comment, stating that a friend of his told him:

“He’ll believe that corporations are people when Texas executes one.”

Audience applause of course… and Colbert skipped a beat trying to come back with a remark.

Thoughts in the Afternoon…

While I’ve been waiting at home for the delivery of my SuperFocus glasses (according to UPS tracking they left the Hagerstown UPS facility at around 7:30 this morning… it is now around 1:30 in the afternoon and they are not here yet. Of course, the estimated delivery listing said they would come at “some time” today… so I’m just going to wait.

Anyway, while sitting here waiting, I was thinking about the things that make politicians

the servants of corporations with endless supplies of money, while they ignore the needs of citizens who have little or no cash to spare. Notice I didn’t distinguish between Democrats and Republicans… I can cite instances where members of both parties have knuckled under to Corporate funds. Although I

must say that, during this season, and especially after the Citizens United decision by the Supreme Court, the Republicans are a good ten times ahead of the Democrats in raising corporate donations for campaign ads (about $100.00 vs. $1,000,000.00 so far) and, unlike the small players, the Republican contributions have not been attributed to anyone… they are completely secret.

That’s going to make the campaign season a little off center as we watch TV ads and listen to radio shows. It’s going to be the responsibility of blogs like this one to keep all the

players honest. So I hope as petitions come up and phone calls need to be made that my readers will be as active as necessary to help us preserve the America that is run by the People and not by the Corporate Elite.

Comments Off on Thoughts in the Afternoon…

Ben & Jerry on the “Personhood” of Citizens United:

There is an organization of businessfolk who are adamantly against the Citizens United decision of the US Supreme Court. They’ve made a video to kick it off:

They mentioned another video on the Story of Citizens United. Here it is:

And, finally, if you represent a corporation, there is a statement you can sign at  Business For Democracy, part of the American Sustainable Business Council.

Go there and you will find more information and a statment to sign. I hope you will.

The Story of Stuff – Season 2

We directed you to the original Story of Stuff last year when the Supreme Court decided that Corporations were People in the Citizens United decision.

Now we’re pleased to direct you to: 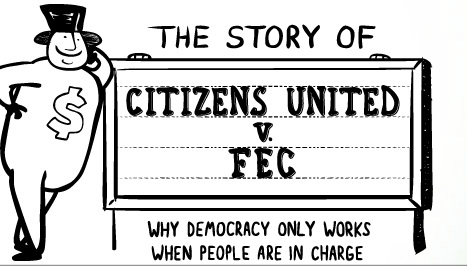 Click on the picture and then settle back and enjoy. Then get ready to support the organizations behind it. There’s at least one petition and lots of contribution areas.

Comments Off on The Story of Stuff – Season 2

Let’s hear it for Russ Feingold!

Congress vs. Supreme Court? Television and Radio vs. Politicians?

Comments Off on Congress vs. Supreme Court? Television and Radio vs. Politicians?

The Supreme Court caught the cartoonists’ attention this week.

First, Jack Ohman in The Oregonian:

…or The Alito Elite.

Ted Rall, who turns up all over the web:

We are all looking for corporate identities… the Supreme Court has given us a whole new category of citizenship!

Comments Off on Cartoon(s) of the Week