Without being merely a violent attacker, Obama went after Romney by pointing out the misinformation he passed along in point after point. Obama did it by ultimately being Presidential. Romney screwed up by being non-Presidential (and insulting to America‘s President, a tasteless move.)

I think I agree with Bill Maher in summing up Obama’s performance:

“Obama was decent enough to not piss on the CORPSE”

Obama has completely recovered from the problems with the first debate. He made sure the 47% statement of Romney got into the discussion after Romney tried to tell us that he was supportive of and trying to help the 100%.

“Not true, Governor Romney… not true” was the statement Obama had an ease of coming back with. Did he do an active attack like “liar, liar“? No… he was respectful, something Romney is not capable of.

Comments Off on Obama was the clear winner last night…

Nestle, Byron (my dogs) and I agree with Bill Maher: 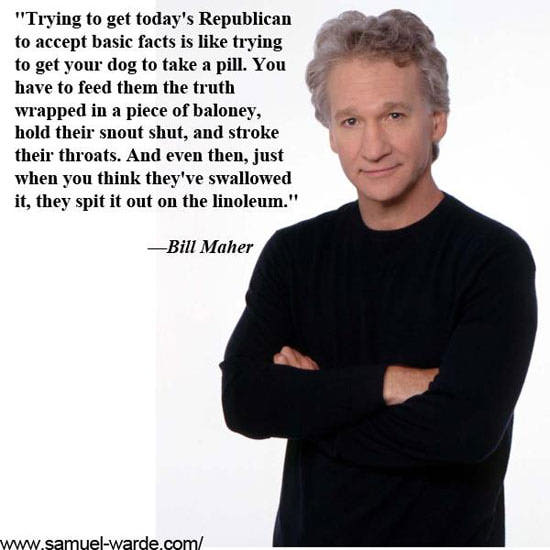 (Thanks to All Hat, No Cattle for putting this one up.)

Comments Off on Nestle, Byron (my dogs) and I agree with Bill Maher:

Quote of the Day – Romney and Education

“Mitt Romney was attacking Obama about our failing education system. He has a point. We are graduating millions of people in this country who are so lacking in basic analytical skills, they are considering voting for Mitt Romney.” 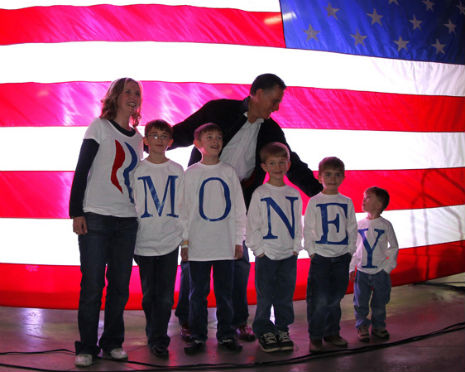 ..and he’s a triumphant speller.

Comments Off on Quote of the Day – Romney and Education

Good news when all we hear about are Republican billionaires…

Bill Maher entered himself into the big-time world of large political donations on Thursday when he announced he was donating a million dollars to a pro-Obama Super PAC. It remains to be seen how Bill Maher’s more liberal guests will react to the news when his “Real Time” returns on March 2.

Guess why in her religion quest she turned down Hari Krishnas.

Comments Off on Bill Maher pulls out another O’Donnell piece:

It’s another week and Bill Maher has released another clip of Christine O’Donnell (he says he’ll do one every week until she agrees to come on his current show… she did 22 or 23 of his old shows…):

O’DONNELL: You know what, evolution is a myth. And even Darwin himself –
Story continues below

MAHER: Evolution is a myth? Have you ever looked at a monkey?

O’DONNELL: Well then, why they — why aren’t monkeys still evolving into humans?

“New Rule: Not everything in America has to make a profit. You know, if conservatives get to call universal healthcare ‘socialized medicine,’ I get to call private, for-profit healthcare ‘soulless, vampire bastards making money off human pain…’

“When did the profit motive become the only reason to do anything? When did that become the new patriotism? ‘Ask not what you could do for your country, ask what’s in it for Blue Cross-Blue Shield.’”

Bill Maher has hit it on the head…

In the HuffPo last night, Bill Maher wrote a very solid piece called “New Rule: Not Everything in America Has to Make a Profit.” He hit the nail right on the head. Profit is what has put us in the mess we currently occupy.

Here’s a quote I think sums it up nicely:

Did you know, for example, that there was a time when being called a “war profiteer” was a bad thing? But now our war zones are dominated by private contractors and mercenaries who work for corporations. There are more private contractors in Iraq than American troops, and we pay them generous salaries to do jobs the troops used to do for themselves ­– like laundry. War is not supposed to turn a profit, but our wars have become boondoggles for weapons manufacturers and connected civilian contractors.

Then add Prisons, Television News, and Medicine… all things which used to be carried out for our good as a civilization and did not have the profit motive. Now they all do.

…if medicine is for profit, and war, and the news, and the penal system, my question is: what’s wrong with firemen? Why don’t they charge? They must be commies. Oh my God! That explains the red trucks!

Comments Off on Bill Maher has hit it on the head…

Bill’s Favorite Quote for the Week:

This was from Chris Kelly who is a writer for Real Time with Bill Maher:

Hemingway said that the problem with Henry Miller was that he got laid in the afternoon once and thought he invented it. Governor Mark Sanford got laid in Argentina two weeks ago and the way he continues to go on about it, you’d think he cracked cold fusion. The man won’t shut up. If Henry Miller talked about his sex life as much as Governor Mark Sanford talks about his sex life, people would have started thinking he was some kind of perv.

And that’s the best summary I have seen of the Sanford situation.

Comments Off on Bill’s Favorite Quote for the Week: