Here in Shepherdstown, WV, we have very few major local conflicts… but one I discovered 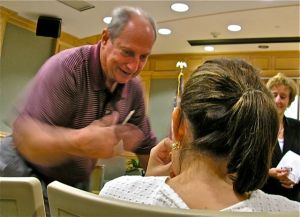 John Doyle before the presentation.

shortly after moving here close to three years ago was the amount of complaining by a few locals being coordinated by their State Delegate John Doyle over the design of the Phase I Arts Center building at the University.  Most of the original arguing went on before I moved to town… when I got here, drawn by the Nationally famous Contemporary American Theater Festival and the wonderful intellectual capacity of this small village (which was far superior to Hagerstown, MD, where Elly and I were living), the Phase I building was already about to open and, over the years, we have been to theater performances, art exhibits  and related receptions there and found it a great structure and perfect art location.

Now, a number of locals who live, apparently, in 19th Century Houses across Rte 480 and who want Shepherdstown to stay a century-and-a-half-years-old in design, have returned to the presentation made at the University tonite to announce Phase II, and raised their issues again about the architectural design, copper shingling, round rooflines, etc. However, a relatively large number of residents, yours truly included, spoke in favor of the buildings and completely outnumbered the complainers. 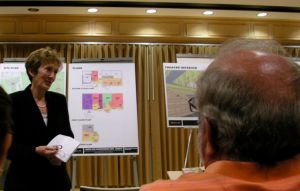 The Phase II building will include a new Arena Theater (around 180 seats) which will be used by CATF in the summer and by the University the rest of the year; scenery, prop and costume shops; upper and lower lobbies; sculpture and painting studios; classrooms and more. 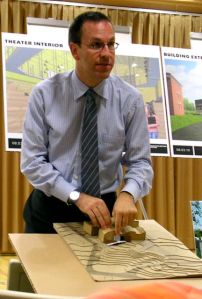 presented the building design, and then answered questions, getting stuck in about 20 minutes of brouhaha from the design protesters. Ed Herendeen and a few of the CATF people, Mayor Jim Auxer and a number of other locals listened closely to the rest of the presentation, asked questions about handicap access and other design elements, and, in general, were impressed with the designs.

Phase II of the Center for Contemporary Arts is slated to be built on Shepherd’s West Campus at the intersection of Route 480, Shepherd Grade, and West Campus Drive. The second phase of the building is funded by an $11 million state appropriation –  and, to be fair, Delegate Doyle has worked very hard to obtain the State funding and should be praised for his fund raising activities.

I’m looking forward to Phase II being constructed and know that, some years down the road, we’ll be entering the complaint fray with Phase III, which will add two more theaters and three more buildings to the mix. 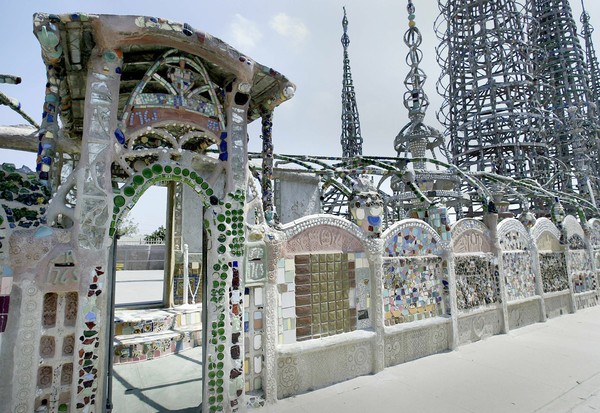 I’ve really only been to Los Angeles to spend time once, but during that time one of the most important things for me was to visit the Watts Towers, the folk art monument and masterpiece in one of the city’s worst neighborhoods. The Watts Towers have been on my

interest list since I first read about them in the early 1960s while a student at Northwestern (I got interested in them after seeing a black and white photograph on the cover of a paperback volume of poetry), and I have been monitoring their condition and appearance ever since.

Yesterday’s LA Times pointed out a falloff, due to the economy, in support from the County of Los Angeles in the maintenance of the Towers, Here is a section : 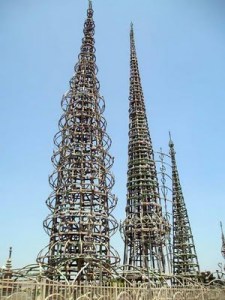 L.A.’s municipal budget crisis has hastened the need to find help just to continue the partial measures that have been the rule. Because of layoffs, a hiring freeze and an early retirement plan aimed at trimming city employment rolls, the Department of Cultural Affairs expects to see its staffing reduced from 70 positions to 37 by July 1. Among the employees being lost to early retirement, Garay said, are Virginia Kazor, longtime curator of the Watts Towers and another historic landmark, Hollyhock House, which architect Frank Lloyd Wright planted on a Hollywood hilltop in 1921.

The towers, topping out at just under 100 feet high, were created single-handedly by Simon Rodia, an uneducated Italian immigrant stonemason who built them in his spare time from 1921 to 1954. He created the framework of steel, wire and concrete and ornamented the three main spires and their 14 surrounding sculptural elements with colorful bits of broken glass, pottery and seashells.

Especially after they were left untouched during the 1965 Watts riots, the towers gained symbolic heft as an emblem of resilience, individual initiative, underdog achievement and potential rebirth.

It is well- known, actually a part of the Towers’ historic mythology, that Rodia, after spending over 30 years creating the architectural model, deeded the property to a neighbor in 1955 and moved away. He died in 1965 in Martinez, California age 86. In 1959 William Cartwright and Nicholas King purchased the lot for $3000. It was later given to the City. That the Towers have survived this long is in itself somewhat of a miracle.

LACMA officials said they would lend their expertise to help conserve the towers. They also promised to help raise private donations to keep them in good repair. That’s critical, because heat and moisture continually create cracks in the towers and the fanciful structures surrounding them, and the eye-popping ornamentation — seashells and pottery shards and discarded tiles and glass bottles — often falls off. The cost of deferred conservation work has been estimated at $5 million, yet the city will struggle to scrape up $200,000 for the landmark next year, and the Cultural Affairs staff is being cut nearly in half. Among the departures is the towers’ curator.

If the Watts Towers were located in, say, Westwood, they might be a more internationally renowned symbol of the city than the Hollywood sign. Then again, if they weren’t tucked at the end of a cul de sac in a poor and gang-wracked neighborhood, there’s a good chance that by now they would have been torn down and replaced by a mini-mall or a housing tract. Notorious for bulldozing its historic structures, Los Angeles is also remarkably stingy when it comes to support for the arts.

Rodia’s gift to the city is far too precious to be lost to history.

One of the things that the LA Times pointed out to me was how few visitors, relative to the quantity of tourists visiting LA and to the actual visits by residents themselves, the Watts Towers actually get. Seeing them in person is something I will never forget. The were splendid, remarkable creations … creative expressions of an Italian craftsman who spent a major part of his life making them. If you get the chance to see them in person, don’t pass it up.