It looks like last night’s debate was Obama’s triumph…

Although I don’t think Mittens made any huge gaffes, he did tell a pile of obvious lies and Obama seemed to catch him on them.  I was reading Andrew Sullivan’s online live commentary as the debate went on, and his summations in the last few minutes pretty much made the event understood:

10.35 pm. After the first truly epic implosion in the first debate, Obama has clawed his way back in the following two, in my view. He has marshalled his arguments as potently as possible; he 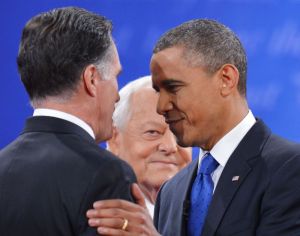 brought the themes of his candidacy together compellingly. His advantage on foreign policy will not, I think, diminish; it may well strengthen. And that is only just. After eight years of the most disastrous, misguided, immoral and a catastrophic foreign policy, Obama has brought the US back from the brink, presided over the decimation of al Qaeda, the liberation of Egypt, Tunisia and Libya, and restored America’s moral standing in the world.
For Romney, he made no massive mistakes. No Gerald Ford moments. And since the momentum of this race is now his, if now faltering a little, a defeat on points on foreign policy will be an acceptable result. But this was Obama’s debate; and he reminded me again of how extraordinarily lucky this country has been to have had him at the helm in this new millennium.
He’s flawed; he’s made mistakes; but who hasn’t? If this man, in these times, with this record, against this opposition, does not deserve re-election, then I am simply at a loss for words. I have to believe the American people will see that in time.
10.34 pm. Obama’s closing statement was his best few minutes in all three debates. Romney’s seems a little desperate and now he – the man whose running-mate is Paul Ryan – is saying he is more bipartisan than Obama.
10.30 pm. So Romney just blames the entire economy on Obama alone. This litany of “the economy sucks throw him out” is the crude but effective big lie.
10.27 pm. “Governor, the people in Detroit don’t forget.” The lies this man has said tonight have been more numerous than I can ever remember in any debate. The man does not have the moral character to be president, in my opinion.

I think Obama, aside from appearing presidential and in control of his information (and correct in presenting his record, as well.) Romney, as Obama said, tried to “Airbrush History.”  The best turnover Obama brought around was when Romney claimed Obama had made an “Apology Tour” of the middle east, and the president cleared up his trips and and made it clear that the charge Romney has made was his “biggest whopper.”

Romney has seemed to abandon neoconservatism by endorsing Obama’s withdrawal from Afghanistan and agreeing on many other of the president’s foreign policy actions.  Obama made sure to point this out. It seemed like Romney was congratulating the President of the United States.

Obama really came out as one who deserves a second term.He was clearly the Commander in Chief and Romney didn’t look like he would fill that role in the same way.