…let’s see how his tendency to lie effects us. It’s not pretty (thanks to the Truth-O-Meter folks!)

What on Earth qualifies this stiff robot to be President? His money?

As Chris Matthews pointed out today, if he can’t manage his campaign, how will he manage a country?

Geez… I go to flea markets all the time. Why don’t I find Renoirs?

Take a look at this WaPo article:

“A ‘lost’ landscape thought to have been painted by Pierre-Auguste Renoir will go on the auction block Sept. 29 on behalf of the Baltimore-born woman who purchased the artwork at a West Virginia flea market for $7. ‘Paysage Bords de Seine,’ a 6-inch by 10-inch canvas dating from about 1879, is expected to fetch $75,000 to $100,000, according to … the Alexandria, Va., auction house overseeing the sale. She said that it’s one of several depictions of the river Seine that the French Impressionist master created near the towns of Bougival and Chatou.

“The Virginia-based buyer, who prefers to remain anonymous, purchased a box of odds and ends at a flea market just across the West Virginia state line and near her home in the Shenandoah Valley in late 2010 or early 2011. She didn’t much care for the painting and said she would never have bid on it if the other stuff in the box hadn’t caught her eye.

“There was a plastic cow that grabbed me, and a Paul Bunyan doll,” said the woman, who lived in Baltimore until she was 4 years old. “And I liked the frame. It was gold and ornate. I thought I could use it for something else if I cut out the painting.”

And here’s the assumed Renoir:

I don’t think I would even have bought it FOR the frame. But a PLASTIC COW! That should have been worth something!

Comments Off on Geez… I go to flea markets all the time. Why don’t I find Renoirs?

Steve Kornacki has a review of Romneys unfortunate statements in Salon

Here’s how it starts:

That it’s fundamentally dishonest hasn’t stopped Mitt Romney from repeating his central critique of Barack Obama’s foreign policy over and over – the idea that the president “went around the world and apologized for America.”  So it shouldn’t be surprising that Romney’s response to the attacks on U.S. diplomatic installations in Egypt and Libya was rooted in the same caricature of Obama as apologizer-in-chief.

“It’s disgraceful,” Romney’s statement, which was released late Tuesday night, read, “that the Obama administration’s first response was not to condemn attacks on our diplomatic missions, but to sympathize with those who waged the attacks.”

That’s not at all what happened, of course.

Waking up to horrible news from Libya and Egypt…

There are two upsetting I got from the news when I turned it on at 6:00 AM and which has made this the start of a very bad day.

1. Attacks at the US Embassies  by Islamic terrorists in Egypt and Libya. Our Libyan Ambassador Chris Stevens  was killed with 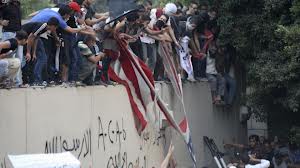 three other Americans, at least one was a diplomat. The Egyptian Embassy was breached, the American flag was taken and destroyed and replaced with an Islamic flag.

The provocation for these attacks was apparently an internet post of an amateur video satirizing the Prophet Muhammad. It seems that the Islamic press claimed this as a major Hollywood film done as revenge against Islamists for 9/11.

2. Although the two Presidential campaigns had come to an

agreement that there would be no attacking each other on 9/11, Mitt Romney blasted the President and his administration for being “sympathetic” to the embassy attackers – calling Obama’s response to the incidents “disgraceful”. He did this at 10 PM last night defying the agreement between his and Obama’s campaigns.

“Obama sympathizes with attackers in Egypt. Sad and pathetic.”

Obama waited to respond until after midnight when the day of remembrance was over. He announced his consolation to the families of the victims and his outrage at the incidents. Then he made everyone aware of his aggravation with Romney’s statement.

“We are shocked that, at a time when the United States of America is confronting the tragic death of one of our diplomatic officers in Libya, Governor Romney would choose to launch a political attack.”

I would have to agree that I think Romney’s remarks were both unfortunate and representative of his unknowledgable command of foreign policy. That he showed lack of support for his country and its administration at a time of National crisis and at a time in which he had pledged to remain in non-attack mode in his campaign, would make Romney less than reliable as a President.