When Does Journalism on the Net change a disturbing image into very poor humor?

I’d like to thank Mashable for posting this article which defines communication symbolism on both the left and the right. What are we…Tasteless, stupid, apathetic? Is that what the editors at HuffPo and Newsweek think in their campaigns to promote readership?

Here’s part of the proof:

Both The Huffington Post and Newsweek are battling backlash for their use of coat-hanger symbols to protest a call for a Constitutional ban on abortions without exceptions for victims of rape and incest. The call for the ban appears in a draft of the GOP’s official 2012 platform, according to CNN. 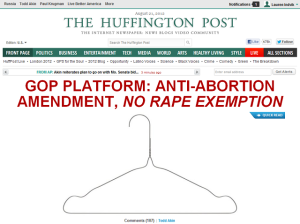 The front page of The Huffington Post was taken up by a large image of a coat hanger late Tuesday morning to illustrate two stories — first this, then this one — related to the proposed ban.

We thought it was powerful,” founding editor Roy Sekoff said of the decision to use the stock image. “It’s saying that this is the inevitable consequence of this kind of policy.” “We knew it went right up to the line of offensiveness,” he added.

Not long after, Newsweek posted a screenshot of The Huffington Post‘s front page with the caption, “Whoa there, Huffington Post!” The post attracted more than 700 notes, most of them supportive of HuffPo. Some, including comedian Rob Delaney, interpreted Newsweek‘s caption as critical.

An hour after the initial post, Newsweek changed the cursor image on its Tumblr page to a coat hanger. The reaction was overwhelmingly negative.

“I hope this guy gets fired,” one follower wrote. “Tasteless,” wrote another. “Congratulations: you’ve insulted, offended, and devalued half the human population with your pathetic attempt to be clever,” chimed a third.

What it looks like the problem lies in Newsweek‘s attempt to transform the coat-hanger from a disturbing image (HuffPo‘s use) to a humorous one (Newsweek‘s). Do they succeed with readers? Gee, I hope not.

Good journalism used to be reporting without preferred point of view… or at least without making that point of view funny in a serious context. Then again, with a cover article entitled ‘Obama’s Gotta Go,’ Newsweek has officially removed itself from good journalism.

Comments Off on When Does Journalism on the Net change a disturbing image into very poor humor?