Jobs for July higher than expected

Stronger-than-expected July jobs number reported by the government Friday eased concerns about an economy slipping back into recession and gave wind to President Barack Obama’s re-election hopes. But economists warned that the road ahead is likely to remain bumpy.

Non-farm payrolls grew by 163,000 jobs in July, according to the Labor Department, which also said the unemployment rate inched up by less than a tenth of a percentage point to 8.3 percent.

The strong report sent stocks soaring for most of Friday’s trading, with the Dow Jones industrial average up more than 220 points in the first hour, closing up 217.29 for the day at 13,096.17.

Mainstream economists had expected about 100,000 new jobs, so Friday’s report was wildly above expectations and more than double the revised 64,000 jobs that were added in June. Most heartening, economists said, was that the gains were spread across all sectors but construction and government hiring.

I find this is very encouraging even though there was a slight increase in unemployment.

Add this information to the number of private jobs gained under Democrats since 1961 and you wonder what Mitt Romney is really going to do about jobs. My guess is nothing! 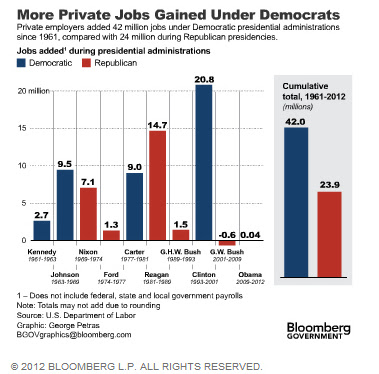 Comments Off on Jobs for July higher than expected