I needed a Wednesday Night Laugh and found this:

Sometimes bloggers do poor research… especially conservative bloggers. Not that I am worried about the blog competition, but here’s a neat piece I found on The Fifth Column: 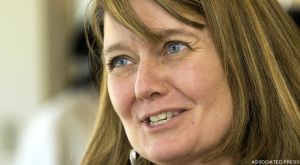 A conservative blogger’s recent attempt to sandbag Pulitzer Prize-winning syndicated columnist Connie Schultz proved to be an epic failure — and the only thing saving him from public embarrassment is Schultz’s own grace.

The story begins on July 9, says Schultz, when she received an email from the inquiring blogger, who promptly misspelled the name of the author, former columnist for the Cleveland Plain-Dealer, and winner of the 2004 Pulitzer for commentary:

Dear Ms. Shultz,We are doing an expose on journalists in the elite media who socialize with elected officials they are assigned to cover. We have found numerous photos of you with Sen. Sherrod Brown. In one of them, you appear to be hugging him.

Uh oh, you might think. Soon she’ll have to defend herself from allegations of being overly cozy with a subject she reports on. Well — not quite.

On July 10, she replied with this:

Dear Mr. [Name Deleted]:I am surprised you did not find a photo of me kissing U.S. Sen. Sherrod Brown so hard he passes out from lack of oxygen. He’s really cute.

You know that, right?

Brown and Schultz have been married since 2004, as even a cursory Google search or glance through either one’s Wikipedia page would show. She recounted the amusing tale on Facebook and noted that as of Tuesday she hadn’t received a response.

Comments Off on I needed a Wednesday Night Laugh and found this:

In a poll by Latino Decisions released today, President Obama’s numbers are rising to 70% of registered Latino voters, compared Romney’s 22%. If that margin held until the election, it would certainly influence Latino voters in battleground states such as Florida, Nevada and Colorado.

Romney’s not giving up, however. He uses Florida Sen. Marco Rubio as a surrogate, and even though the word has leaked from his campaign that Rubio would not be a vice presidential pick, Romney is still hinting that he might.

His latest Spanish-language ad features his Spanish speaking son, Craig, talking about something Romney rarely mentions: the fact that his father, George Romney, was born in Mexico.

In the ad, Craig Romney says:

“I would like to tell you how my father, Mitt Romney, thinks. He values very much that we are a nation of immigrants. My grandfather George was born in Mexico. For our family the greatness of the United States is how we respect and help each other, regardless of where we come from. As president, my father will work on a permanent solution to the immigration system, working with leaders of both parties.”

… and if you believe that, I have a great bridge to sell you.

Quote of the Day – Fox news Poll: Do Republicans have a jobs plan?

Even Fox News in a recent poll doesn’t think Romney can create jobs. The totals? 27 percent of Americans think Romney has a plan to revive the American economy… 41 percent of registered voters think Obama the better plan. That is a 14-point gap.

A revealing question in this poll was “Who do you think will do a better job looking out for you and your family during tough economic times?” 47 percent said Obama and 36 percent Mitt Romney.

As a Fox News commentator said:

And right now, voters are coming to the conclusion that when it comes to credible plans to fix the economy, Republicans have nothing.”

Comments Off on Quote of the Day – Fox news Poll: Do Republicans have a jobs plan?