← Actress Celeste Holm, 95, Dies…
I have not talked much about Syria, but this seems to be a positive statement: → 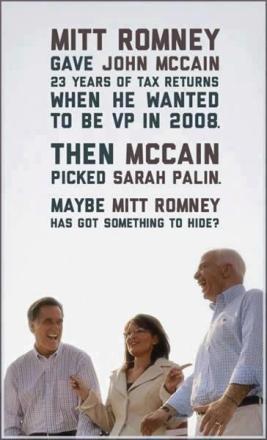 This morning’s pundit shows brought the increased demand for release of the tax returns… or questioned what he was hiding.

“The cost of not releasing the returns are clear.Therefore, he must have calculated that there are higher costs in releasing them.”

“Many of these politicians think, ‘I can do this. I can get away with this. I don’t need to do this, because I’m going to say something and I don’t have to do this. If he had 20 years of ‘great, clean, everything’s fine,’ it’d all be out there, but it’s arrogance.”

Romney should “release the tax returns tomorrow and take the hit for a day or two.”

You know, I think the Obama team is making the right move here. Eventually, even if Romney releases a dozen years of returns, people won’t forget his stalling and wonder why he couldn’t be transparent to the American People.

← Actress Celeste Holm, 95, Dies…
I have not talked much about Syria, but this seems to be a positive statement: →