A quote to consider…Romney puts his business experience in play: 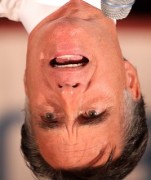 The Mittster made a speech in Las Vegas on Tuesday and said this:

Of course, this is a way to set up the Mitt Romneys of the world to bypass foreign policy, or congressional, or other kinds of experience with a few years of stealing from the 99% to put bucks in their own pockets.

You know, I’d like to see the Constitution say that a presidential candidate should have spent at least three years in the Arts… producing theatre or ballet dancing or doing gallery shows of abstract paintings. Know what I mean?

I’d like to see the Constitution say that a candidate should be required to have taught at a university level for at least three years… or at a primary school level for six…and been a member of a teacher’s union.

Actually, the Constitution should require that the candidate have been an employee for at least three years at a working class level and have been a member of ANY union.

If you think Romney is ready to be President because of his Bain experience, take a look at what it did for his Massachusetts Gubernatorial record… While he says he turned the state around, in reality he let it freeze in a negative mode.

Andrew Sum and Joseph McLaughlin of the Center for Market Studies at Northeastern University reported in July 2007 that Romney’s record as Governor was “one of the worst in the country;”

On all key labor market measures, (Massachusetts) not only lagged behind the country as a whole, but often ranked at or near the bottom of the state distribution. Formal payroll employment in the state in 2006 was still 16,000 or 0.5 percent below its average level in 2002, the year immediately prior to the start of the Romney administration. Massachusetts ranked third lowest on this key job generation measure and would have ranked second lowest if Hurricane Katrina had not devastated the Louisiana economy.

And this was with 25 years of business experience. 25 years.