Quote of the Day – Romney and Education

“Mitt Romney was attacking Obama about our failing education system. He has a point. We are graduating millions of people in this country who are so lacking in basic analytical skills, they are considering voting for Mitt Romney.”

..and he’s a triumphant speller.

Comments Off on Quote of the Day – Romney and Education

Over at All Hat, No Cattle:

Donald Trump will do anything to to be Vice President: 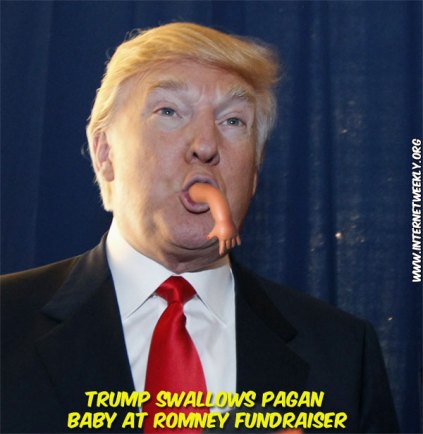 Thanks, Lisa, for putting that one out… I just got up off the floor.

Comments Off on Belly Laugh!

iPhone supporters of Romney probably didn’t notice it, but everyone else did:

The “With Mitt” app, released by the campaign, lets users customize photos with various “Mitt-inspired” frames. “I’m With Mitt,” “American Greatness” and “Believe in America” are among the frame options.

But one stands out: “A Better Amercia” — typo and all. The misspelled word was widely mocked on Twitter after the photo frame made the rounds. An instagram user flagged the photo, and TPM verified the unfortunate typo was still a part of the app Wednesday morning.

The Romney campaign told TPM that the mistake was “corrected immediately” and submitted to Apple. “They have to approve our update,” the campaign said.

Yeah? The graphic above was copied less than 2 hours ago. I didn’t know Apple got that involved with designer’s apps.

Any idea who is reading your cyber posts?

The Department of Homeland Security is watching YOU (and me, too).

If you are a blogger, or play on the Social Network, the DHS is monitoring the appearance of key words to trigger investigations of terrorist or other anti government postings.

How does it work? To start with there are hundreds of words which draw DHS attention… words which I guarantee you have used at some time or another.

RT.com gives this description of how it could happen to you:

So, you’ve just come back from a beach holiday in Mexico and posted about it on your blog. Or maybe you’ve tweeted about skiing lessons? Updated your status, saying you’re stuck home with food poisoning?

All those things will tweak the DHS antennae, according to a manual published by the agency. The Analyst’s Desktop Binder, used by agency employees at their National Operations Center to identify “media reports that reflect adversely on DHS and response activities,” includes hundreds of words that set off Big Brother’s silent alarms.

Department chiefs were forced to release the manual following a House hearing over documents obtained through a Freedom of Information Act lawsuit. It revealed how analysts monitor social networks and media organizations for comments that “reflect adversely” on the government.

And what are the words, pray tell. Here they are in a graphic format so they don’t call attention to themselves as text: 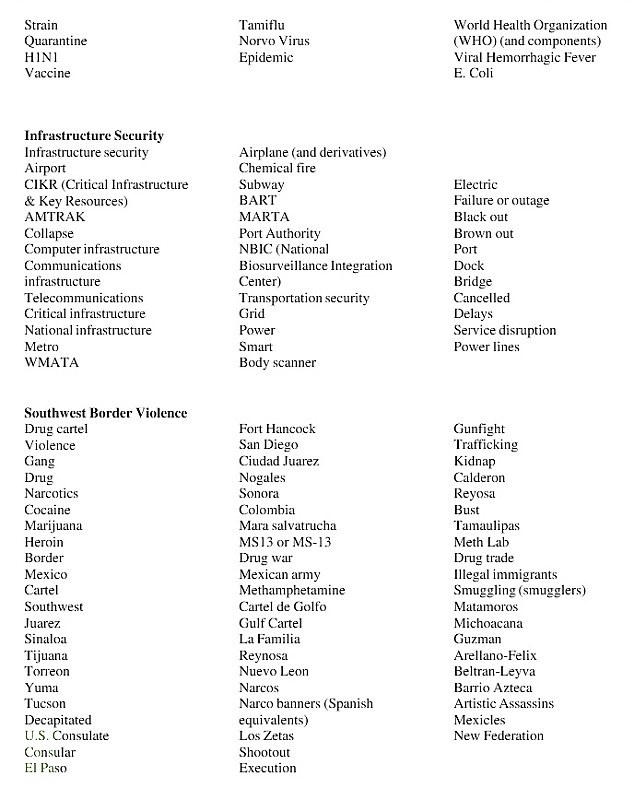 Any words you use in there? That’s what I thought.

Big Brother is Reading You!