It doesn’t matter if you are Republican or Democrat.

If you have a bad language problem, predominantly the “F” word, don’t play this.

Comments Off on Afternoon Entertainment : Katie Goodman on the Current Situation.

North Carolina Pastor: Pen In ‘All The Lesbians And Queers’ With An Electrified Fence, Wait For Them To ‘Die Out’

What is it that gives Religion the kind of Clowns that North Carolina does?

North Carolinians voted to alter the state’s constitution to ban same-sex marriage… why? They were largely moved by fear-tactics fueled by far right religious groups bent on punishing lesbians and gay men. The vote also makes North Carolina, as The New York Times notes, the last state in the South to marginalize gay people with a constitutional ban on same-sex marriage.

Now we have a North Carolina Pastor with a kind of “leper colony” proposal to end the problem of gays and gay marriage. He’s Charles Worley, and he proposed this to his wrapt congregation this week:

“I figured a way out — a way to get rid of all the lesbians and queers. But I couldn’t get it passed through Congress. Build a great big large fence, 150 or 100 miles long. Put all the lesbians in there. Fly over and drop some food. Do the same thing with the queers and the homosexuals. Have that fence electrified so they can’t get out. Feed ‘em, and– And you know what? In a few years they’ll die out. You know why? They can’t reproduce.”

Don’t you just admire the logic of that? You KNOW the Bible‘s “agin’ it”… here’s Worley’s speech:

Victoria Lamb Hatch, who I have quoted in this blog before, made a fine summary statement on Worley’s little diatribe:

Does he know that he’s a hateful, evil person who isn’t earning God‘s favor with comments like these?

I guess Victoria doesn’t realize it, but torturing the gay/lesbian community is where all the FUN is. Right?

What in Hell is wrong with people?

I found this one in Doubtful News:

Stephen McCullah needed to raise $26,700 by May 11 in order to secure enough funds through Kickstarter.com to, well, kickstart his expedition to the Republic of Congo to hunt a reported living dinosaur.

When the deadline arrived, the 21-year-old adventurer and Missouri native had received pledges totaling nearly $29,000.

He’s now packing his bags and a powerful tranquilizer rifle — to bring down a possible dinosaur during what he has dubbed the Newmac Expedition.

McCullah said that his team will end up at the southern tip of Lake Tele, where mokele-mbembe have been reported. The Newmac explorers will set up camp at the village of a pygmy tribe.

For the remainder of their three-month stay, and as long as there are no health or safety issues intervening, the men will set out every day with a variety of special cameras, searching for new species, large or small, including canine-sized tarantulas.

McCullah and his associate are established Creationists, I suppose hoping to cling to the Creationist line that the Earth is around 6,000 years old and men and dinosaurs lived togather (the would have HAD to.)

That they were funded through Kickstarter leaves me in doubt about the ethical nature of that organization… with the knowledge that KS takes 5% of the $26,700 for listing it. Making money on unintelligent people is much too easy in the U.S.A.

A cartoon, however, to explain why dinosaurs are not here now for these people: 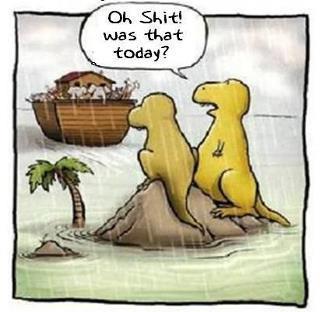 The Obies! My favorite awards of the year…

The Village Voice has announced this year’s off-Broadway awards… the Obies … for the past year. And here they are:Best New American Play, which is accompanied by a $1,000 prize.

The Obies were judged by a committee of seven: Brian Parks, Obie Awards Chairman and Arts & Culture editor of The Village Voice; Michael Feingold, chief theater critic for the Voice, two-time Pulitzer finalist, dramaturg, and Obie Chairman Emeritus; Alexis Soloski, a Voice theater critic as well as contributor to The New York Times, the U.K. Guardian, and BBC Radio, plus theater professor at Columbia University; Annie Baker, Best New American Play Obie winner in 2010 for her plays Circle Mirror Transformation and The Aliens; Anne Kauffman, accomplished director, instructor, and 2007 Obie winner for her direction of The Thugs; José Rivera, two-time Obie Award winner for his plays Marisol and References to Salvador Dali Make Me Hot; and Helen Shaw, a theater critic for Time Out New York and a past Obie judge. Her writing has also appeared in The Village Voice.

Comments Off on The Obies! My favorite awards of the year…

If you filed on April 15th and want to find out how much you saved in your taxes, you can go to FairEconomy.org and take the Tax Fairness Pledge”… something the top 400 of the very rich could effect our whole economy by taking. The top 1% of the country took in 90% of the income gains in 2010, so they’re doing just fine. But lately the folks at the top have not been asked to pay their fair share in taxes.

If these rich folks had paid their fair taxes, what could it have meant? Just how rich are they?: 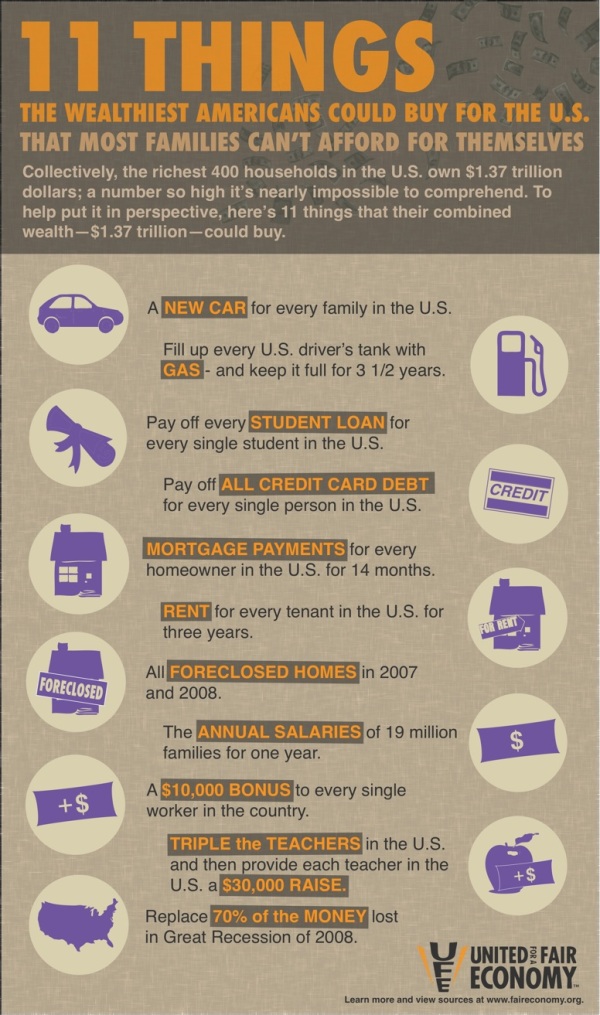 Even if they only paid ALL of their Income gains above 35% they could cover at least half of all this stuff!

What about you? Are you paying your fair share (or more) of taxes? You can find out HERE by using the calculator, then sign the Tax Fairness Pledge, where you can select necessary areas to contribute excesses to.

My thanks to United For a Fair Economy.

Comments Off on Take the Tax Fairness Pledge…