When Mitt ran for Massachusetts Governor – and when he served – he said some interesting things:

…like he was a Moderate Republican with Progressive views…

…what about preserving a woman’s right to choose and the right of women to have a safe abortion and to support Roe V. Wade…

…or as an active participant in Federal support for health care with Ted Kennedy.

Of course that Romney NEVER EXISTED (according to Romney)

And the truth will set you free! 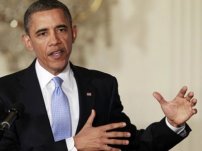 In an interview on ABC Television today, President Obama has announced his personal support for same sex marriage and civil unions, something that Mitt Romney has forcefully come out against. This has been done with great political risk: Republicans will try to use this as a wedge with religious African Americans and with uneducated white voters.

This, however, stands against 30 states that have banned same sex marriage (and most of whom have banned civil unions), most recently yesterdays vote in North Carolina.

How Obama uses this position which will undoubtedly bring the worst aspects of the Republicans out of the…hmmm…closet. Romney, who lost an important staff member last week BECAUSE HE WAS GAY, has already knuckled into a minority interest in his Party.

There is so much religion involved in this issue that it makes my head swim.

Quote of the Day from the Press Conference you probably missed…

“I give my full support to Mitchell Romney. He has the makings of a great dictator. He is incredibly wealthy, but pays no taxes. And it’s not much of a leap to go from firing people to firing squads, and from putting pets on the top of a car to putting political dissidents on top of them.”

– Sacha Baron Cohen, in character as The Dictator,

Needed a joke in the morning. Here’s the video:

Once again, I am embarrassed to live in West Virginia.

I have said many times in this blog that, with the exception of Shepherdstown and most of the Eastern Panhandle, I dislike being identified with West Virginia. Whether it is a supposedly Democratic senator who acts and votes like a Republican (Manchin) or the hillbilly stereotype other states see us as, being in West Virginia is no place for a liberal. We are victims of tons of jokes told in other states, like:

Q. Why do ducks fly over West Virginia upside down?
A. There’s nothing worth crapping on!

Well, we topped ourselves again, In yesterday’s Democratic primary, a man in prison in Texas got 4 out of 10 votes for the Presidential nomination.

Keith Judd, is serving time at the Beaumont Federal Correctional Institution in Texas for making threats at the University of New Mexico in 1999. Obama received 59 percent of the vote to Judd’s 41 percent. He got on the ballot  by paying a $2,500 fee (don’t know who paid it for him…but I am not surprised that some West Virginian did) and filing a form known as a notarized certification of announcement with the Secretary of State’s office.

Interviewing a WV resident, the AP published a statement:

“I voted against Obama,” said Ronnie Brown, a 43-year-old electrician from Cross Lanes who called himself a conservative Democrat. “I don’t like him. He didn’t carry the state before and I’m not going to let him carry it again.”

When asked which presidential candidate he voted for, Brown said, “That guy out of Texas.”

Now it’s a question whether Judd will have a representative at the Democratic National Convention (15% of the vote or more usually gets you a rep.)

So, West Virginia has embarrassed me once again. Where will it end?

You need to know this. Wisconsin voters hit the polls today for the first battle in a historic recall election in the state. Democrats will

choose between one of four Democratic candidates – plus a Republican spoiler candidate running as a Democrat – to take on Governor Scott Walker in the June 5th recall elections. Walker himself is facing a primary challenge as well. Milwaukee Mayor Tom Barrett is the favorite among Democrats and is actually polling ahead of Scott Walker in recent polls. But, Walker has raised $21 million so far – more than any other candidate for Wisconsin Governor in history – and has spent just as much on TV advertising in Wisconsin as all the Republican presidential candidates combined. However – all that money isn’t translating into gains at the polls. Each month since January – Walker has seen his support go down. Keep an eye on Wisconsin – if people power overcomes money power in this recall election – then it could be a perfect model for progressives nationwide, heading into the general election.

Lots of us are watching this process closely. If he is voted out of office, Walker will only be the second governor in 50 years that this has happened to.

I encourage all Wisconsonites (my son included) to keep the pressure up there. Knowing they are fighting a lot of out of state money from the Koch brothers and others.

I haven’t seen who won the primary yesterday… hopefully NOT the Republican spoiler (although I’d be surprised if it went that way.)

Quick Update: Milwaukee Mayor Tom Barrett won the primary and will go up against Walker. Barrett is currently polling higher than the Governor.

Comments Off on Thom Hartmann reports on Wisconsin Primary to unseat Gov. Walker…

Thanks to Brion Emde for his overnight contribution to this blog…

My thanks to Brion Emde for last night’s donation to Under The LobsterScope. Thanks, Brion. I think you are our first member from Redmond Washington.

Watch your e-mail, your Bill’s Barnhart Ornaments  font is on the way!

If you’d like to help us out at Under The LobsterScope (and we hope you will), go HERE.