This article is from Rodale. The first couple of lines are below… then connect to the full story:

Your tomatoes are under attack.

“Taming of the Shrew” at Synetic Theater 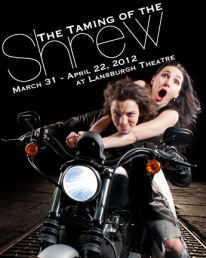 Saturday night, Elly and I went down to DC to see Synetic Theater‘s “The Taming of the Shrew” with our friends Cecil and Linda (who had given Elly the tickets for her Birthday.)

“Shrew” is the latest in Synetic’s series of Shakespeare adaptations performed without words (which, to me, doesn’t make it truly Shakespeare… story line without the poetry, the words, eliminates the thing that makes Shakespeare Shakespeare.) It is performed with dance, music, incredible special effects, mime and sound effects and is incredible to watch. The best way to describe it is to shown their video promotion, which will give you an idea:

Irina Tsikurishvili plays Kate the shrew (if you’ve never seen Shakespeare’s play but have seen Kiss Me Kate, you know who the character is) under the direction of her adapter-director husband, the amazing Paata Tsikurishvili, who has created the “Silent Shakespeare Series, which has won tons of awards and never fails to sell out houses. The music, a mass of hip-hop rhythms, is by resident composer Konstantine Lortkipanidze and is stunning. It keeps the production moving for the full 90 minutes.

Tsikurishvili has set the show in “Paduawood”  and made the characters members of the contemporary fashion and arts communities. The characters of Shakespeare, Kate, her sister Bianca, their father Baptista (a fashion designer played with great humor by Hector Reynoso) and Bianca’s suitors who, as you may remember, may not marry the younger sister until Kate has a husband…something that seems highly unlikely to happen.

Along comes Petruchio, a motorcycle riding painter, who accepts a large cash payment to take Kate away and make her his wife, which he does. Kate, of course, is tricked into this and her shrewishness makes her hell to be around. And that’s the point of the piece – how Petruchio tames her and makes her his true love.

The show is filled with fun, the audience laughs throughout, and Irina Tsikurishvili’s performance brings that audience to it’s feet at the end of the show.

Unfortunately, we saw the second to last performance and it is no longer open. We will, however, look forward to the next piece in the series, or to any other of the “speaking” plays that Synetic also does.

Comments Off on “Taming of the Shrew” at Synetic Theater

Did you hear Charles Krauthammer on Inside Washington?

Taegan Goddard made this his quote of the day, referring to pundito-nastioso Charles Krauthammer‘s view on Rubio being selected VP:

“If Rubio passes the vetting process, assuming he does, I think he’s the obvious choice. And if he says he doesn’t want the office, he’ll find a horse’s head in his bed. The next day he will accept. Romney’s not going to take no for an answer.

We have ways, we Republicans.”

— Charles Krauthammer, on Inside Washington.

Frankly, I don’t think Mitty is that powerful. Do you? Or was this Krauthammer’s attempt at the thing that usually escapes him…humor?

Fox News “adjusts” Obama quote… who would have thought?

“Somebody gave me an education. I wasn’t born with a silver spoon in my mouth. Michelle wasn’t. But somebody gave us a chance — just like these folks up here are looking for a chance.”

Essentially, this was the same statement he made in 2009… well before he had any rich Republicans running against him (like Romney.)

The quote didn’t mean quite the right thing for Steve Doocy of Fox News, so he added three little words to it… words not found in the video of the speech or in the transcript:

“Unlike some people, I wasn’t born with a silver spoon in my mouth.”

See… doesn’t that couch it a little better in the context of an election? Isn’t Fox News great for doing us a favor of focusing on the true meaning of something the President says? Not!

Unfortunately, Doocy’s little addition turned up in a Washington Post article, a New York Post editorial and a number of conservative blogs. This leads me to propose that Obama no longer make speeches at all… just let Steve Doocy and his Foxy friends create his words for him.

(Thanks to TPM for pointing this one out).