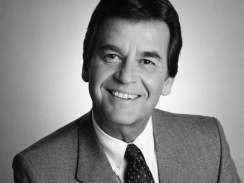 Dick Clark, creator of “American Bandstand” and other television programs, had a heart attack Wednesday morning at Saint John’s hospital in Santa Monica, CA, a day after he was admitted for an outpatient procedure.

For a time in the 1980s, he had shows on all three networks and was listed among the Forbes 400 of wealthiest Americans. Clark also was part of radio as partner in the United Stations Radio Networks, which provided programs – including Clark’s – to thousands of stations.

The original “American Bandstand” ran for thirty years on ABC’s daytime lineup beginning in 1957. Before that the show was a local program in Philadelphia. In his 1958 hit “Sweet Little Sixteen,” Chuck Berry sang that “they’ll be rocking on Bandstand, Philadelphia, P-A.”

In 1974, at ABC’s request, Clark created the American Music Awards after the network lost the broadcast rights to the Grammy Awards.