So… do we have a new McCarthy in Congress?

Suppose we had a Congressman who started accusing the representatives that didn’t agree with him as being Communists? Well, apparently we do.

Rep. Allen West, R-Fla., has said “he’s heard” that up to 80 House Democrats are members of the Communist Party, but, of course, he has denied to name names.

His office says West was referring to the Congressional Progressive Caucus when he made his remark at a town hall meeting Tuesday night.

Here’s the statement his office sent to the CBS affiliate in Miami:

Asked to comment on these charges, Libero Della Piana, a vice chairman of the party, stated that there were no Congressional lawmakers who were party members and that West’s comment is a “sad ploy.”

And now some folks like Sarah Palin are suggesting West as a potential VP candidate. Who would have thought?

On April 10, 1912, the Titanic, largest ship afloat, left Southampton, England on her maiden voyage to New York City. The White Star Line had spared no expense in assuring her luxury. A legend even before she sailed, her passengers were a mixture of the world’s wealthiest basking in the elegance of first class accommodations and immigrants packed into steerage.

She was touted as the safest ship ever built, so safe that she carried only 20 lifeboats – enough to provide accommodation for only half her 2,200 passengers and crew. This discrepancy rested on the belief that since the ship’s construction made her ‘unsinkable,’ her lifeboats were necessary only to rescue survivors of other sinking ships. Additionally, lifeboats took up valuable deck space.

Four days into her journey, at 11:40 P.M. on the night of April 14, she struck an iceberg. Her fireman compared the sound of the impact to ‘the tearing of calico, nothing more.’ However, the collision was fatal and the icy water soon poured through the ship.

It became obvious that many would not find safety in a lifeboat. Each passenger was issued a life jacket but life expectancy would be short when exposed to water four degrees below freezing. As the forward portion of the ship sank deeper, passengers scrambled to the stern. John Thayer witnessed the sinking from a lifeboat. ‘We could see groups of the almost fifteen hundred people still aboard, clinging in clusters or bunches, like swarming bees; only to fall in masses, pairs or singly, as the great after part of the ship, two hundred and fifty feet of it, rose into the sky, till it reached a sixty-five or seventy degree angle.’ The great ship slowly slid beneath the waters two hours and forty minutes after the collision

The next morning, the liner Carpathia rescued 705 survivors. One thousand five hundred twenty-two passengers and crew were lost. Subsequent inquiries attributed the high loss of life to an insufficient number of lifeboats and inadequate training in their use.

This is a great idea… I got started reading it after a mention on Andrew Sullivan‘s site, and I went to the official FixUC proposal page: http://www.fixuc.org. Here is the basis of the proposal direclty from the FixUC presentation:

What is the UC Student Investment Proposal?

Within the past decade, UC students have suffered from egregious increases in tuition costs. In 2011, the State of California cut $650 million in UC system funding and decreased its total support to the system by 21.3 percent. These cuts were met, yet again, with tuition hikes by the UC, and tuition for the 2011-2012 school year rose nearly 18 percent from last year’s. UC tuition has nearly quadrupled over the last decade alone.

In an effort to combat the increasing financial burdens facing students of the University of California, Fix UC has designed a comprehensive plan for the restructuring of the system by which students pay for their education.  The UC Student Investment Plan will make it possible for students to attend the UC without paying any upfront costs whatsoever.

After they graduate and get jobs, UC alumni will pay a static percentage (based on 5%) of their salaries for 20 years of employment.  Because payments are based on salary, no UC graduate will have to reckon with fees that he or she cannot afford.  Students will no longer be held hostage by unmanageable loan payments with fluctuating interest rates and strict deadlines.

Under the Student Investment Plan, graduates will only ever have to pay a stable, predictable fraction of the money they make – that means no loans and no debt.  The plan will also garner the UC enough additional revenue to free it from complete dependence on state funding and make room for long-term institutional growth.

The purpose of the plan is to reestablish the UC as an affordable option for all qualified California students while gradually reducing its reliance on undependable state monies.

Got it? Some of us are still paying our own and family members’ funding for advanced education from all over the country and the concept of colleges “investing” in their students’ futures is a solid one to me. It not only will, eventually, bring in more money to the institutions it will serve to improve the education structure…better classes make better investments.

Fix UC President Chris LoCascio recently presented an update on Fix UC to the UC Board of Regents at their meeting at UC San Francisco. The next steps will involve working with the federal government and UCOP to explore a collection system through the IRS that the UC and other American institutions can use to collect funds from graduates in the United States and abroad. This seems to mean that they are hoping to go beyond UC to other Universities. This is a plan worth getting other schools interested in… however, it should begin with student involvement to make it realistic. Here’s their organizing statement:

Fix UC is a student-created and run organization dedicated to solving the University of California’s funding crisis.

Our goal is to identify root problems and provide long-term solutions to the UC regents, with the hope that they will not only consider, but implement the plan outlined in our UC Student Investment Proposal.

Comments Off on University of California’s FixUC proposes an investment plan to replace growing student loans.

When I take a nap, I usually turn on one of my favorite podcasts to listen to as I fall asleep… these

include This American Life, Radiolab, The Smartest Man in the World, and Talkin Walkin (the weekly 1-hour broadcast by Kevin Pollak who interviews comedians while doing his right-on impersonation of Christopher Walken. If you’ve never heard it go HERE.) I clicked on Episode 6.

Anyway, I was just about asleep when I heard Pollak’s Walkin say my name (pronounced wrong, of course… he said “chak-ur-ee-deez” and I pronounce it “Chak-ur-eye-des.”) Apparently it was from my submission of a funny phrase  a couple of weeks ago, an ongoing listener contest that Pollak has put out. The phrase I gave him was “Beak a leg”, the theatre way of saying good luck. He and his guest, Corey Levin, went on to discuss the phrase for about 5 minutes before I fell asleep.

I must say, it made me feel connected to the internet.

Santorum is out… does not endorse Romney. 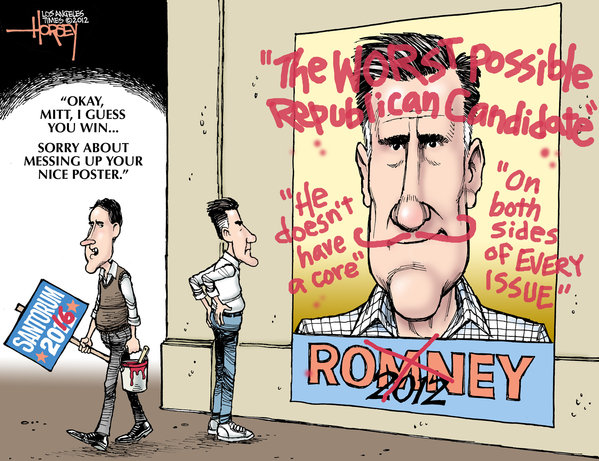 – David Horsey in the LA Times.

After giving Mitt Romney a serious challenge for the Republican presidential nomination, Rick Santorum suspended his campaign on Tuesday. He made one of his better speeches, but did not endorse Romney.
Santorum failed in his approach to the presidency for a number of reasons:

• Lack of money when compared to Romney.

• Not much of an organization… in some states he didn’t even get on the primary ballot.

• Competition from Newt Gingrich who split some of the far right vote.

• Romney’s habit of saying and doing anything to win – including changing his statements ton agree with Santorum’s conservative from his established centrist position.

Santorum is only 53 years old… in 2016 he will still be younger than Romney is now. If Romney loses this election to Obama, Santorum will be ready to compete in the next election… and will have four years to raise the funds and put together an organization.
Can he?
(thanks to the LA Times for this morning’s info.)
39.430100 -77.804161

Comments Off on Santorum is out… does not endorse Romney.