There, is everyone covered?

And tomorrow it all begins again.

The Idols of My Generation are Passing: Mike Wallace Dies at 93.

(CBS News) CBS News legend Mike Wallace, the “60 Minutes” pit-bull reporter whose probing, brazen style made his name synonymous with the tough interview – a style he practically invented for television more than half a century ago – died last night. He was 93 and passed peacefully surrounded by family members at Waveny Care Center in New Canaan, Conn., where he spent the past few years. He also had a home in Manhattan.

“It is with tremendous sadness that we mark the passing of Mike Wallace. His extraordinary contribution as a broadcaster is immeasurable and he has been a force within the television industry throughout its existence. His loss will be felt by all of us at CBS,” said Leslie Moonves, president and CEO, CBS Corporation.

“All of us at CBS News and particularly at ’60 Minutes’ owe so much to Mike. Without him and his iconic style, there probably wouldn’t be a ’60 Minutes.’ There simply hasn’t been another broadcast journalist with that much talent. It almost didn’t matter what stories he was covering, you just wanted to hear what he would ask next. Around CBS he was the same infectious, funny and ferocious person as he was on TV. We loved him and we will miss him very much,” said Jeff Fager, chairman CBS News and executive producer of “60 Minutes.”

A special program dedicated to Wallace will be broadcast on “60 Minutes” next Sunday, April 15.

If all you knew Mike Wallace from was 60 Minutes which he did from 1968 to 2008, then you only knew half of his amazing television career. He hovered between entertainment and news in the 40s and 50s, got his first network presence on ABC’s Mike Wallace Interview – which was based on his earlier NYC interview program called Night Beat, where he developed his browbeating interview style.

CBS News producer Don Hewitt took Wallace’s hard-charging style as a counter to the avuncular Harry Reasoner and on September 24, 1968, Wallace and Reasoner introduced “60 Minutes” to the 10:00 p.m. timeslot, where it ran every other Tuesday. While critics loved it and awards followed. it had a hard time building an audience. After seven years trying various nights, “60 Minutes” went to 7:00 p.m. Sunday, where it remains today.

Myron Leon Wallace was born in Brookline, Mass., on May 9, 1918. He attended Brookline High School and was graduated from the University of Michigan in 1939 with a B.A. degree in liberal arts.

Mike, we salute you.

Cartoon(s) of the Week – The Court Protects Us All

Government by the majority… 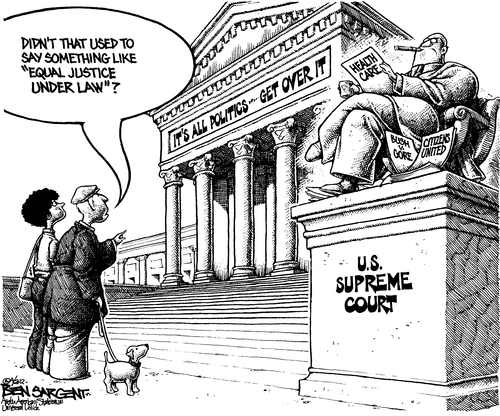 Government responds to the needs of the people…