Good Morning on a lovely Saturday…

I’m over at WSHC (89.7 FM) getting ready for my 11 AM show  (which you can also listen to on the internet from wherever you are at http://www.897wshc.org/listen_live/index.html.)

Last night Elly and I went to Shepherdstown Film Society where we have spent many enjoyable Friday nights. The film was George Clooney‘s Good Night and Good Luck which was about Edward R. Murrow‘s exposure of Senator Joseph McCarthy on CBS television news. Filmed in black and white and very cleverly using visual and sound clips of the actual Army McCarthy hearings and other 1954 or so contemporary television videos, Clooney, who plays news director Fred Friendly, and Richard Straithern, who plays Murrow, bring off performances that arfe damned close to reality.

Todd Cotgreave, the CEO of WSHC, did the film introduction last night and ran the discussion afterward and those of us who stayed around for it had an enlightening conversation on McCarthyism and that period in American history when so many people were accused of being Communists.

As a follow-up to last night’s conversations, I’m going to play some of Bob and Ray’s 1954 radio sketches from their Mary Backstayge Noble Wife soap opera where Ray Goulding did an amazing parody of Joe McCarthy. It will start with Bob Elliott discussing what they were doing in the Backstayge series and he will also play some original McCarthy material. Then I’ll play one of the episodes which deal with the real-estate hearings in Skunk Haven, NY, protesting Harry Backstayge’s building of a 14 story home. Commissioner Carstairs (the McCarthy character) is the lead prosecutor of the case and it is quite funny. 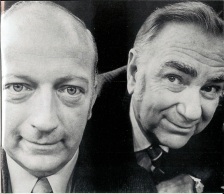 So many people who wanted to attack McCarthy in the 50s avoided doing it out of fear that they would be falsely labeled as Commies. The fact that Bob and Ray could do their imitation and not suffer from it is because, as usual, they were remarkably non-poltical. I’ll be playimng these clips sometime during the first hour of my show (from 11-Noon).

Tune in if you can.