← If you didn’t see Letterman last night…
Quote of the Day – Obama at the Center… Where did the Republicans go? →

Yesterday, 11 state attorneys general sent a letter to Congress requesting a constitutional amendment which would reverse the Supreme Court’s decision in Citizens United.

This section of the letter gives the historic background that SCOTUS eliminated:

The case overturned elements of the Bipartisan Campaign Reform Act of 2002 (also known as the “McCain-Feingold Act” or “BCRA”) pertaining to the corporate financing of electioneering communications in the run-up to primary and general elections. The Supreme Court ruled that these restrictions on corporate political spending violated the First Amendment’s free speech protections, thereby allowing corporations to spend unlimited amounts of money on elections. 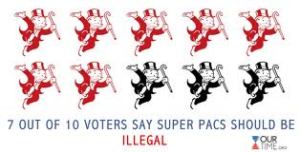 In effect, the Citizens United decision overturned a century of jurisprudence, dating back to the Tillman Act of 1907, which supported Congressional authority to restrict corporate political spending on federal elections. With respect to the BCRA, the decision directly overrules key provisions of McConnell v. Federal Election Commission, 540 U.S. 93 (2003), which upheld the BCRA provisions that prevented direct expenditures by corporate entities on electioneering communications. Importantly, Citizens United kept intact other critical rulings in McConnell regarding disclosure requirements. However, by its decision the Court gave corporations the same rights under the First Amendment as individuals, and thereby severely limited Congress’s power to regulate corporate political spending and invalidated bipartisan, democratically-enacted restrictions on corporate behavior.

Hopefully this brings a start to an action which will eventually eliminate the Super Pacs and bring our elections back to the majority voters.

Hopefully, this won’t become a political volley between Republicans and Democrats.

← If you didn’t see Letterman last night…
Quote of the Day – Obama at the Center… Where did the Republicans go? →
%d bloggers like this: