Is everyone getting ready for tomorrow?

I think I dislike April Fools Day more than any other designated day of the year. I have fallen victim to April Fool gags more times than I can remember… in fact, it’s how I knew my first marriage was ending when my, then, wife didn’t play a joke on me. That didn’t stop most of my friends from taking me in.

Yeah, I’ll put something on the blog which will be a completely humorous fiction… and I’ll respond to e-mails as usual. However, I’ll be happy when the day is over.

So where did April Fool’s Day come from. Infoplease.com gave this historic summary:

Ancient cultures, including those of the Romans and Hindus, celebrated New Year’s Day on or around April 1. It closely follows the vernal equinox (March 20th or March 21st.) In medieval times, much of Europe celebrated March 25, the Feast of Annunciation, as the beginning of the new year.

In 1582, Pope Gregory XIII ordered a new calendar (the Gregorian Calendar) to replace the old Julian Calendar. The new calendar called for New Year’s Day to be celebrated Jan. 1. That year, France adopted the reformed calendar and shifted New Year’s day to Jan. 1. According to a popular explanation, many people either refused to accept the new date, or did not learn about it, and continued to celebrate New Year’s Day on April 1. Other people began to make fun of these traditionalists, sending them on “fool’s errands” or trying to trick them into believing something 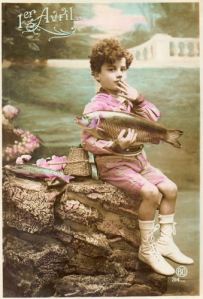 So how did it get over here and into our present day incarnation? Perhaps it came over with the French.
French youngsters celebrate “poisson d’Avril” or “April Fish” by sneaking up behind friends and sticking a picture of a fish on their backs… the target is then pointed out and laughed at by others.
The Premiere Avril postcard on the left is a testament to the April Fish concept.
Anyway, I hope all of you avoid being humiliated tomorrow… and please have a concern for people you may play these pranks on. You’ll want to keep your friends on April 2nd.
39.430100 -77.804161

Unfortunately they still haven’t fixed the internet connection, so if you are beyond our local limit you won’t be able to tune in. Sorry.

Comments Off on Saturday WSHC show on regular schedule today…

Sacramento Bee editorial cartoonist Rex Babin, who often appeared on this blog’s Cartoon(s) of the Week segment, died  at his home after a long battle with cancer. He was 49.

Babin’s favorite cartoons were often his most poignant. After the attacks on the World Trade Towers in 2001, he drew Libertas slumped and weeping with her head in her hands.

Babin continued drawing until recently,lending his pen to both local Sacramento Politics and the National campaign for the Republican nomination.
Here is one of his cartoons from the ongoing primaries:

It’s a shame to lose so good a cartoonist at so early an age.