Hopefully, we are getting closer to John Case finishing his first draft of the adaptation of Odets’ “Waiting for Lefty” we have committed to. My job will then be revisions and adding the music to it.

We’re updating it to get closer to the current day/ current protests of the Occupy Movement.

Sometime this summer we’ll audition,cast and perform it at The Folly on it’s great outdoor stage:

I haven’t had a chance to direct anything since 2009, so this is going to be fun for me… get me up off my butt and back into action.

Comments Off on Working on “Lefty”

Oral Argument on Health Care begins before the Supreme Court

I’ve been sitting watching C-Span 3 which is replaying the arguments today (the beginning of six hours of arguments over three days) – Today they debated whether the Healthcare Law includes a tax and, if so, does the Supreme Court have the jurisdiction to decide the case.

Reuters did a summary of the morning’s session:

LEGAL QUESTION: Whether a challenge to the new requirement that most people in the U.S. buy health insurance by 2014 or pay a penalty must wait until the penalty is due and a refund is sought. This provision of the law is known as the “individual mandate.” A central issue is whether the court should regard this as a general “penalty” or as a “tax” that would be covered by a U.S. tax law known as the Anti-Injunction Act, premised on the notion of “pay first, litigate later.”

* WHO ARGUED: Robert Long, of Covington and Burling, appointed by the court to argue that tax policy should apply and delay the case; Donald Verrilli, who as U.S. solicitor general is the government’s chief courtroom lawyer, and Gregory Katsas of Jones Day, who joined the government’s argument.

* THE HIGHLIGHTS INSIDE: A majority of justices across the ideological spectrum suggested by their questions that federal tax law would be no barrier to reaching the core question of whether Congress had the power to require people to buy health insurance or pay a penalty.

* INSIDE THE COURTROOM: Justice Clarence Thomas did not ask any questions during the session, his usual style during oral arguments. He last asked a question on Feb. 22, 2006, during arguments in a death penalty case. Among the spectators who got one of the coveted seats inside courtroom with the white marble columns and red velvet drapes were: Secretary of Health and Human Services Kathleen Sebelius; Attorney General Eric Holder; outspoken critic of the law Alabama Republican U.S. Senator Jeff Sessions; and Florida Attorney General Pam Bondi, who has led the challenge by the 26 states.

* THE LOWDOWN OUTSIDE: Hundreds of supporters and protesters dueled on the sidewalk chanting and marching with signs declaring their feelings about the law.

* THE DAY’S QUOTE “FOR”: Kathie McClure, an Atlanta attorney, said the law has allowed her children, who suffer from epilepsy and diabetes and are now in their 20s, to get health insurance that they otherwise would not have had. McClure was first in line for a public seat ahead of Tuesday’s second day of arguments and has been camped out since Friday. “This is personal for me. This is about my children’s’ future. But it’s really also about all the other millions of people in America who are in their same situation. In America we spend a boatload of money, trillions of dollars, and still we have a very poor outcome for our people,” McClure said.

* THE DAY’S QUOTE “AGAINST”: Sally Oljar, from Seattle, said it defies the U.S. Constitution ,o force Americans to buy anything. “I’d like to think that the Supreme Court supports the Constitution. … If they don’t, then there are a lot of us who are ready to go to jail. The day hasn’t come when the government can force me to buy a damn thing,” she said.

* UP NEXT: Tuesday is the main event of the three days when the justices will hear arguments on whether Congress, in requiring that most people in the U.S. buy insurance by 2014, exceeded its power to regulate interstate commerce.

The Supreme Court has posted the audio and transcript of the arguments on its website, here, and C-Span 3 will probably replay the session this afternoon and this evening (check listings.)

It’s over a month… why isn’t Zimmerman in custody?

George Zimmerman, whose fatal shooting of an unarmed teenager has sparked nationwide protests over alleged racial profiling, had thought the entire incident would “blow over,” a friend said Sunday. Instead, Zimmerman is hiding amid death threats and demands for his arrest. 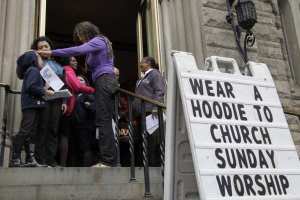 As to how anyone could think that the death of a 17-year-old armed with candy and iced tea could just disappear doesn’t realize his own failing.

Although he has some friends coming out to claim that Zimmerman is not racist, there is the problem of the 911 tape, the list of previous calls to the police from Zimmerman claiming other black people in the neighborhood (where apparently there are black residents) and the fact that Zimmerman was told to withdraw, but followed Trayvon Martin anyway.

In any other similar situation, a Zimmerman-type offender would be arrested if only to prevent his leaving Florida. Why not here?

Good Morning, America. Time to get back to our roots…

… and to me that starts with dropping “In God We Trust“ and returning to “e pluribus unum” (Out of Many, One) as our official motto (I’ve been thinking about this all night – 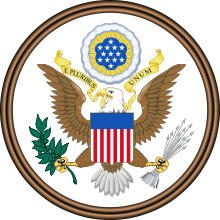 even in one very bad dream – since posting the last night’s quote from Mark Karlin.)

It was adopted by an Act of Congress in 1782, although not as an official motto but what came to be considered, de facto, the basic statement of the USA. It is on the official Seal of the United States.

“In God We Trust,” in this era of the Religious Right separating itself from any compromise position with the center or the left, is meaningless.  What do we trust in God for? That He would allow one side to corrupt the country in His name? If we don’t get back to unifying the many, we will no longer have control of the basics of daily life.

OK… I’m an atheist, as I’ve pointed out many times on this blog. The religious connection with politics, in general, leaves me both appalled and extremely worried. Even if I had a belief that was in line with the other 80% of Americans, I would be upset about single sects pushing their beliefs on everyone else. This is not American…not the American Way.

Show me a candidate that can finish a speech without acknowledging a blessing from  their own God, and I will show you someone who is more reliant

on what he or she CAN DO by him- or herself, with the united population…the one out of many. That, to me, is worth voting for.

Comments Off on Good Morning, America. Time to get back to our roots…