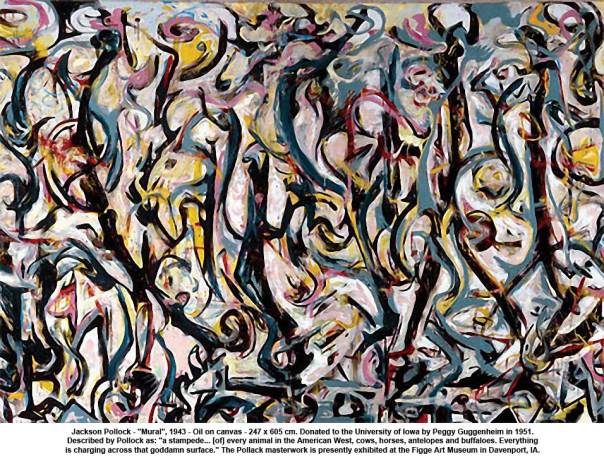 Iowa, USA – Two national art associations said on Friday that they are “outraged” by a proposal to force the University of Iowa to sell the Jackson Pollock ‘Mural’ painting, and say it could threaten University of Iowa’s accreditation. The Association of Art Museum Directors and the American Association of Museums have vowed the support to “help prevent this permanent and irredeemable loss.” “The (associations) are alarmed to learn of the recent proposal to sell the Jackson Pollock painting ‘Mural’ to underwrite costs at The University of Iowa,” the two organizations said in a joint statement. “Such a sale would violate a fundamental ethical principle of the museum field, one which all accredited museums are bound to respect: that an accessioned work of art may not be treated as a disposable financial asset.” The 1943 painting, which was donated to The University of Iowa in 1951 by Peggy Guggenheim, is one of the most valuable, estimated at $140 million in 2008, and well-known pieces in the university’s collection. House Study Bill 84, which proposes the sale to pay for local scholarships for University of Iowa arts students, was introduced by Republican state Representative Scott Raecker, chairman of the House Appropriations Committee. The idea of selling the painting first surfaced in 2008 as a way to help pay for the $743 million bill for repairing damage caused by flooding. At the time it was opposed by University of Iowa leaders and the art community and ultimately tabled.

“It’s a long-standing principle in the museum community as a whole, if you sell an object in the collection, proceeds must be used for the purchase of other pieces or care of pieces in the collection, not to, as my boss likes to say, fix the boiler,” said Dewey Blanton, a spokesman for the museum association based in Washington D.C. Blanton said such a move could prompt a complaint, which could be filed by anyone, and that would set off an accreditation review process. Blanton said virtually every major museum in the U.S. is accredited. The status qualifies those museums for certain types of philanthropic and corporate support as well as identifies it as eligible to house certain prestigious collections on loan, Blanton said. “The museum there is accredited. This is a potential consequence to be considered,” Blanton said. University of Iowa and Iowa state Board of Regents officials have declined comment about Raecker’s bill, but in 2008 UI President Sally Mason was on record saying University of Iowa does not want to sell the Pollock. University professors have not been so reticent, quoted in the Daily Iowan, Art and art history Professor Christopher Roy said the painting is a wonderful monument in the history of art, is very important culturally to the state of Iowa, that its loss would be devastating to his art students and it would cause Iowa to go from being a great state with a great program, to “third-rate losers.” “It would be a disgrace to a civilized place such as Iowa. Whoever did such a thing would go down in history as one of the most disgraceful people in the history of the state,” Roy said. “I can’t believe anyone would be stupid enough to bring it up.” Art-history Professor Craig Adcock said he was also unhappy with the bill and that “It would be a disaster to sell the painting”.

It’s amazing that a Republican politician puts destroying culture ahead of doing something both intuitive and clearly required – raising taxes.  But then, all that paint scribbling by Pollock can’t be worth more than scholarships in this guy’s district. Wouldn’t that give him more votes?

We’re getting ready to celebrate the 4th with Congressmen everywhere sucking down hotdogs and beer and telling us all how they love America and will get our budget balanced and get the evils out of government. Then they get into their Koch Brothers paid cars and head for the next community cookout so they can check it off on their itinerary.

Meanwhile, we decide not to spend too much this weekend. There’s a good chance these dipshits will let the government close down and my Social Security check won’t be there in August, so I have to save cash now (gosh, does this mean I’m helping to lower the economy further because I’m not buying anything?) for basics through the end of summer.

And while I know there’s no fool like a July fool, I’m afraid the fool is me because I didn’t prevent these guys from doing all this (but now you’ll never catch me buying a Bounty paper towel.) You didn’t either.