An Economic Quote for the Morning…

… from Paul Krugman in the NY Times:

“Consciously or not, policy makers are catering almost exclusively to the interests of rentiers — those who derive lots of income from assets, who lent large sums of money in the past, often unwisely, but are now being protected from loss at everyone else’s expense.”

Hmmm. “Rentiers.” There’s a new word to learn. It’s sort of a nice way to say bastard bankers, or corporate pigs… a lot of class for a collection of scum ( or “scumiers”). Yet these are the people who have taken their tax deductions and NOT created jobs… nor even encouraged the creation of jobs… but have pocketed their cash in the back of their pants in Mexico and China and India… Certainly it is not being spent here in the good old USA.

And who pays the tab on the huge bill created for operation of our government, military, debt repayments and the loans and support w are making to just about every other civil population but our own? Why, we do. The American “Middle Class“… just a label now, since any economic positives of being in the middle class have been thoroughly negated.

Krugman sums up how these “rentiers” take over the ruling power in our country: 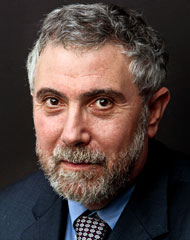 “And that explains why creditor interests bulk so large in policy; not only is this the class that makes big campaign contributions, it’s the class that has personal access to policy makers — many of whom go to work for these people when they exit government through the revolving door. The process of influence doesn’t have to involve raw corruption (although that happens, too). All it requires is the tendency to assume that what’s good for the people you hang out with, the people who seem so impressive in meetings — hey, they’re rich, they’re smart, and they have great tailors — must be good for the economy as a whole.“

And we sit by the wayside, left behind, in pain and broken (and broke), thinking that we could get rich, too, rather than standing up and fighting back.

Comments Off on An Economic Quote for the Morning…

If you didn’t see (and play) the Les Paul Google logo, you’ve missed a lot of fun…

You can still go to Google’s home page and play

You can watch this video and learn how to play Obladi, Oblada:

Comments Off on If you didn’t see (and play) the Les Paul Google logo, you’ve missed a lot of fun…