Quote of the Day – So where does Romney stand now?

After moving as far to the right as he could and changing his past “moderate” positions to very conservative ones, Romney came out in New Hampshire yesterday accepting the left-ish view on Global Warming:

“I believe the world is getting warmer, and I believe that humans have contributed to that. It’s important for us to reduce our emissions of pollutants and greenhouse gases that may be significant contributors.” 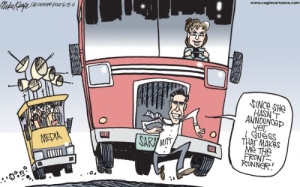 Of course the view that humans are contributing to climate change is highly controversial one in GOP circles. Most conservatives fiercely dispute the notion that Earth is warming at all. This does not put Romney, who is having trouble enough getting around his Massachusetts Health Care plan with Republicans, anywhere near the potential for their universal support.

Of course, he does know the real story of Paul Revere’s Ride.

Comments Off on Quote of the Day – So where does Romney stand now?

Sarah has done it again… this time while visiting Boston’s Old North Church (you know, “One if by land…Two if by sea”). She sort of suggested that Paul Revere rode through Boston warning the British that we were going to be free.

Is there ANY chance we can convince the Republicans to nominate this woman for the Presidency? Please…