← It’s raining in Shepherdstown for the Earth Day Celebration!
Product of the Year! Lunch Bugs! →

Rain or Not, the Earth Day Festival goes on…

I just spent three hours at the Earth Day Festival in Shepherdstown’s Morgan’s Grove Park. Elly and the Sustainable Shepherdstown folks had a booth, as did most of the non-profits and craftsmen in town.

When I walked over to the park from my house (about a quarter mile away) there was a little bit of sun peeking through the clouds… but the weather said we’d have scattered showers and perhaps some thunder storms today, so I checked out the areas with decent coverage.

There was a fabric bandshell at the bottom of the hill from the Pavilion…the big protective area in case of rain… and they were warming up the mikes and checking the sound levels until it was time for the first act: a guy playing wooden wind pipes to

The next group to play was a country singer with an all-girl backup band – Lucas and the Lovelies – and they were pretty good.

Then it started to rain, which made the folks watching the music get under the pavilion so that they could see it without getting wet. 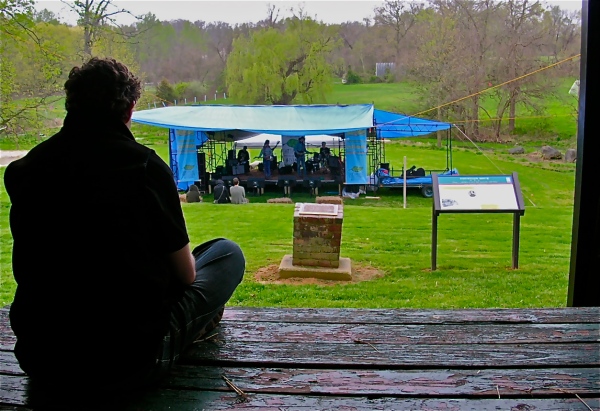 Meanwhile, Elly was selling cookies she baked this morning and Ruth Robertas’s

Brownies under their tent top, raising money for Sustainable Shepherdstown and promoting the Community Garden. I watched the booth for a little while (sold some cookies/brownies) while she talked with some of their volunteers

and with Peter Corum at the Morgan’s Grove Market Booth .

So I waited till the rain let up, then I walked home to feed the dogs. I think they’ll have a little more time without rain, but i do expect more before they close the booths in a couple of hours. It was fairly well attended, though.

← It’s raining in Shepherdstown for the Earth Day Celebration!
Product of the Year! Lunch Bugs! →