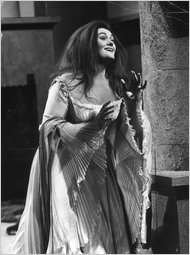 The great soprano Joan Sutherland has died. Born in Australia, Ms. Sutherland made her Metropolitan Opera debut in 1961 and continued entertaining audiences there for four decades.

Anthony Tommasini in the NY Times pointed out:

Ms. Sutherland’s singing was founded on astonishing technique. Her voice was evenly produced throughout an enormous range, from a low G to effortless flights above high C. She could spin lyrical phrases with elegant legato, subtle colorings and expressive nuances. Her sound was warm, vibrant and resonant, without any forcing. Indeed, her voice was so naturally large that at the start of her career Ms. Sutherland seemed destined to become a Wagnerian dramatic soprano.

Following her first professional performances, in 1948, during a decade of steady growth and intensive training, Ms. Sutherland developed incomparable facility for fast runs, elaborate roulades and impeccable trills. She did not compromise the passagework, as many do, by glossing over scurrying runs, but sang almost every note fully.

Her death at her home in Switzerland was confirmed by her close friend the mezzo-soprano Marilyn Horne.